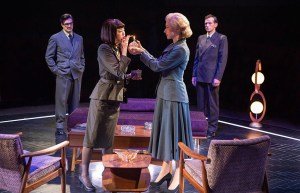 It’s Hatcher vs. Hitchcock in “Dial M for Murder.”

My husband and I recently watched the suspense-master’s 1954 classic film, which was adapted by Frederick Knott from his own 1952 stage play.

Now, The Old Globe has commissioned playwright Jeffrey Hatcher to modernize the piece — but not too much, since there still have to be dial phones in 1950s London.

Result? The pace is quicker, the dialogue is snappier, the women are smarter and more complex. But the motive for murder remains the same.

Tony Wendice wants to knock off his wife — who he married for money to begin with (this is made much more evident in the new version) — mostly out of revenge. But also, of course, to gain full control of her fortune.

Tony, being the suspicious sort, spied on his wife and found out that Margot was having an affair. The twist in the new incarnation is that it’s with a woman, New York-based mystery writer Maxine, for whose latest book Tony is doing the publicity (that’s a new twist!).

It’s the whip-smart Maxine who enumerates the five stock motives for murder: money, fear, jealousy, revenge, and protecting someone you love.

She also clarifies, as Hitchcock himself did, the difference between a mystery (whodunnit) and a thriller, which focuses on how the killer will be caught and how the innocent person will be vindicated. Clearly, what we have here is a thriller… because Margot is sentenced to hang (a bit of legal misogyny added into the mix).

This new Tony is a scurvier guy than the one played by Ray Milland in the film, who was calculating but not nearly as nasty. And Maxine (Ruibo Qian, recently seen at The Globe in “Water by the Spoonful”) seems savvier than Robert Cummings, though she’s stuck in the familiar trope of the amateur sleuth putting all the pieces together (score one for the gals!), outsmarting the bumbling Inspector (John Tufts) from Scotland Yard. It didn’t work out that way in the movie.

There are nice, unexpected turns all along the way. Director Stafford Arima has found clever ways of making the sneaking and hiding work on an arena stage, no mean feat.

Uncannily (but presumably by design), all the performers look surprisingly similar to the film actors, including lovely Kate Abbruzzese in the role of Margot, originally played by the gorgeous Grace Kelly. She also looks terrific in the stunning creations of costume designer Ryan Park.

As Tony, Nathan Darrow has the perfect English reserve and sangfroid, even as he’s hiring someone (Ruy Iskandar) to kill his wife. To the credit of dialect coach Emmelyn Thayer, John Tufts’s  Inspector has a decidedly non-Oxfordian accent. Maxine is an American. All told, it’s a delightful ensemble.

Just as Hitchcock’s work was uniquely cinematic, this adaptation is wonderfully theatrical.

You know whodunnit from the get-go, but (no spoilers here!) how the thorny plot unfolds is the source of all the thrills, chills and fun.