‘Together Again’ – Pride Parade Roars Back, with Justice on Marchers’ Minds 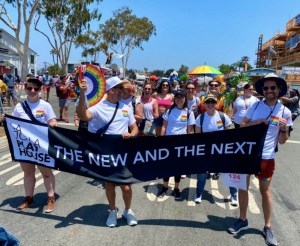 “Team Playhouse,” as marchers from the La Jolla Playhouse called themselves, taking part in the return of the San Diego Pride Parade Saturday. Photo credit: @ljplayhouse via Twitter

San Diego Pride helps with connections year-round, providing direct services and grant funding for those in need in the LGBTQ community.

That’s just what they did Saturday, as tens of thousands of people joined in the return of the annual in-person Pride Parade and Festival in Hillcrest and Balboa Park.

“I’m inspired by the thought of our community coming together again,” Lopez said. “Together we will continue to pursue justice with joy.”

San Diego Mayor Todd Gloria marched in the parade, which started at 10 a.m. from the Hillcrest Pride Flag on University Avenue. Gloria is the first openly LGBTQ person to be elected mayor of San Diego.

Police reported after 3:30 p.m. that area roads had reopened following the parade, but warned that a large number of pedestrians remained in Hillcrest and Park West and around Balboa Park.

San Diego Pride’s Parade and Festival is the fourth largest such event in the nation, organizers said, and hosted more than 350,000 attendees in 2019, the last time it occurred before the pandemic hit.

That approaches Laurel Street, the entrance to the Pride Festival, which began at the parade’s close and continues through Sunday evening.  More than 100 LGBTQ entertainers will perform on four stages.

#happypride Today our very own Sgt. Gonzales from @SDSOSantee not only represented the @SDSheriff
but as the Liaison for our #LGBTQ #COMMUNITY within #LawEnforcement. Amazing #SaturdayVibes in #SanDiego celebrating #diversity #pride #SanDiegoPride pic.twitter.com/XOMM474d9i

“We are still fighting for justice and that takes away from our joy,” said Mila Jam, one of Saturday’s performers and a Black and transgender advocate. “We need each other now more than ever to stand strong and see liberation through.”

The San Diego Public Library, which has a booth at the festival, also released a limited-edition library card with a design created by Crawford High School student Leslie Pagel.

It features an illustration of Marsha Johnson in front of New York City’s Stonewall Inn. Johnson was a gay and trans rights activist and one of the prominent figures in the Stonewall uprising of 1969.

“I wanted to honor her and the work she did for the community,” Pagel said. “She was alive during a time when trans people were heavily misunderstood, yet they were the ones to carry much of the community’s fight towards liberation.”

Happy #Pride, San Diego! It was such an honor marching in the @SanDiegoPride Parade as our city’s first elected LGBTQ Mayor alongside @AGRobBonta and @SeanEloRiveraD9. Let’s continue to be out, be proud, and fight for our better future. #ForAllofUs pic.twitter.com/Gy70k97FP4

All roads have reopened from the #SanDiegoPride parade. There is still a large number of pedestrians in the Hillcrest, Balboa Park, and Park West neighborhoods. Please drive safe, sober, and keep an eye out for all the pedestrians. pic.twitter.com/JCYcrKr6ep

– City News Service contributed to this re