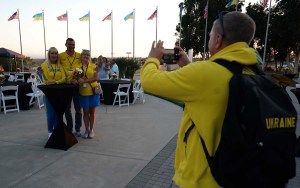 Passing beneath their nation’s flag, Ukrainian athletes were cheered Thursday as they walked a red carpet into the courtyard of the Chula Vista Elite Athlete Training Center.

“You are a very cool people, a very cool nation,” said the former 25-foot long jumper, towering over Salas.

Brian Melekian, president of the city-owned former Olympic Training Center, told a dinnertime crowd of almost 200 that being able to compete amid their travails is “nothing short of a miracle.”

A post-meet celebration? Not quite.

It was a salute to a team still a week away from the world track and field championships in Eugene, Oregon.

With funding from global governing body World Athletics, the U.S. Olympic and Paralympic Committee, Point Loma Nazarene University and local business sponsors, 22 Ukrainian athletes have arrived over the past week to train at the Chula Vista center.

They united from Italy, Finland, Germany, Poland, Spain and other bases of exile.

Already a decorated high jumper at age 20, she gained fame in March for making a three-day, 1,250-mile car trip from Ukraine to jump at the World Indoor Championships in Belgrade, Serbia. She won.

She now trains in Nuremberg, Germany, with shoemaker Puma also helping her mother and sister settle there.

She explained her Belgrade determination: “I must compete. I must show the resolve for my country.”

In Eugene, her qualifying round is July 16 and final two days later. But Maguchih made it clear she wouldn’t be there if Russian Olympic champion Maria Lasitskene — winner of the past three world titles — were allowed on the apron at hallowed Hayward Field at the University of Oregon.

“This terrorist state Russia,” she said. “If they will compete, I won’t compete.”

Russia and Belarus have been banned over the February invasion of Ukraine.

Speaking to reporters before the team chowed down on Chicken Kyiv and other delights (courtesy of Pushkin Restaurant catering), Maguchih described her nation’s pain.

“We were enjoying our lives, and now people sit in basements, they hear bombs. It’s so terrible,” she said. “I hope I come back after my outdoor season. Come back to Ukraine.”

Anna Ryzhikova, a finalist in the 400-meter hurdles at last summer’s Games, recounted: “Some athletes have relatives who went into the Army to protect our country, and every one of us are worried 24 hours a day about the lives of our family and friends.”

She added: “We can gain strength here mentally and feel like a family. We will always remember the time we spent here.”

Head coach Serdyuchenko stood on a modest stage and made a bold statement.

“We believe that the light forces will win the fight against the dark, and our [final] victory will come very soon and there will be … peace in Ukraine again,” he said.

He noted the Olympic Games was about greatness, citing Jesse Owens and Michael Phelps. But he also hailed  lesser lights for “showing the spirit of camaraderie and pride.”

“International competition creates national pride,” he said as American and Ukrainian flags flapped on poles behind him. “That’s a shining example what we have in these Ukrainian athletes.”

Said Melekian, the training center CEO: “There are things in this life that transcend sport, that are bigger than any competition, and define who we are as human beings. … It was once remarked that the only thing necessary for the triumph of evil is for the good to do nothing.”

He hailed the “newfound camaraderie” of Americans and Ukrainians. “The world is watching you. And know that you are changing the world for the good in your own unique way.”

Joe Watkins of Point Loma Trust said: “Our hearts are broken with you. Our hearts are with you…. It is our hope that you feel and experience our hospitality … so you can inspire others in your home country.”

And Mayor Salas said: “Our community is your community. As they say in Spanish, mi casa es su casa. My home is your home.”

She read from a city proclamation and told how the buttons she’d give out signify citizen champions.

“We feel each and every ordinary citizen of Ukraine is doing extraordinary things — that we have not had to face here in the United States of America,” Salas said. “God bless America. But also God bless the people of Ukraine.”

Arrangements to host the Ukrainians, including about a dozen coaches and support team members, “happened very, very quickly — probably less than a month ago,” said Spencer Jamison, the center’s vice president of business development.

So the team is being shuttled from a hotel about 10 minutes away.

He credited close ties with the USOPC.

“We came across a car service that would meet them at [San Diego International] baggage claim, at the stairs, all times of the day and night,” he said. “Everyone was really happy to do it.”

But the Ukraine contingent isn’t staying in the center’s dorms. On-site housing was long ago booked solid for summer.

“We provide the facilities and the services so they don’t have to think of anything else,” Jamison said. “Whatever they need, we do our best to make it happen.”

High jumper Maguchih has fond memories of an earlier trip to America — for the Prefontaine Classic in late May at the site of the world meet — and a U.S. coach’s kindness.

She recalled a tender gesture by the father of Vashti Cunningham, America’s best threat in the high jump.

Randall Cunningham, the former NFL quarterback and Vashti’s coach, “give me a present when I come to Eugene for the Diamond League,” Maguchih said with a smile. “He give me lipstick. .. and some American food.”