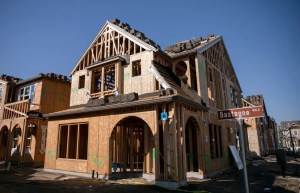 Days from the end of the legislative session, political observers are once again asking themselves whether a bitter, unresolved battle over labor standards will spell the end of California’s most ambitious proposal to solve its housing affordability crisis.

Assembly Bill 2011, which would unlock commercial real estate for residential use, potentially leading to more than one million apartments across the state, has splintered organized labor.

While affordable housing developers, the state’s carpenters union and even the largest unions representing teachers and health care workers support the bill, it faces fiery opposition from the formidable Building and Construction Trades Council and the even bigger California Labor Federation behind them. The council, colloquially known as the Trades, represents 450,000 workers in nearly every other construction industry.

In years past, the fight over labor standards signaled early death knells for housing bills. But since the carpenters and a few non-construction labor groups joined hands with developers, this bill plowed through legislative hurdles its predecessors couldn’t. The two labor camps now have until Thursday — the last day to amend the bill — to come up with a compromise that would shield lawmakers from having to choose between alienating powerful labor allies or creating much-needed housing amid a historic crunch.

The Carpenters and the Trades sat down for multiple Zoom calls in recent weeks at the behest of Senate leadership, led by Majority Leader Mike McGuire, to come up with a compromise, according to those at the negotiating table. McGuire’s office did not respond to multiple requests for comment.

But with the clock ticking, the groups are far from a solution.

“Sen. McGuire is the most patient person in the California Senate,” said Erin Lehane, legislative director for the Trades. “We’ve compromised on several if not many things and we’re waiting to see if the sponsors are willing to do the same. At this point it takes two to tango.”

At the heart of the argument is a shortage of at least 100,000 construction workers to build the millions of homes California needs. The groups disagree on how to grow the labor pool. The Trades are pushing for language that says a portion of the workforce for these projects must be graduates of an apprenticeship program, which effectively means union members. The Carpenters say only a tiny fraction of homebuilders are unionized, and instead of waiting years for that pool to grow, legislation should simply require higher wages, health benefits and tools to enforce existing labor law.

“This is a tremendously valiant effort to try and find political common ground, but when you have two mutually exclusive positions in the marketplace, it’s a hard thing to do,” said Danny Curtin, director of the California Conference of Carpenters.

Assemblymember Buffy Wicks, the Democrat from Oakland who authored the bill and leads the Assembly Housing Committee, said she feels confident in the labor language already in the bill.

“This isn’t a taking-on-labor fight. This is a solving-the-housing-crisis fight,” Wicks said. “I want to keep trying to reach a deal, and I’ll do everything I can to do that. But if a deal isn’t reached, many of the colleagues I’ve spoken to in the Senate are prepared to support the vote for solving this problem.”

To make matters more complicated, Wicks’ bill isn’t the only big housing bill that would allow housing on commercial land. Senate Bill 6, introduced last year by Sen. Anna Caballero, a Salinas Democrat, would also make it easier to build housing on commercial corridors now zoned for parking, offices and retail. But instead of making the process by-right, like Wicks’ bill — whereby a developer can build as long as they check all the boxes — it remains discretionary. That means local governments can hold their usual hearings to determine whether a project fits in their community, but without the onerous process of changing the land’s designation from commercial to residential.

Both bills have advanced in tandem: Caballero’s with Wicks’ help, and vice versa. That’s very different from what happened last year.

“I’ll be real frank with you,” Caballero said. “This is a fight not only between the Trades, but between the Assembly and the Senate. The Assembly held up our bills and didn’t do much to try and broker the compromise. It’s always best if people can come together.”

Another key difference between the bills: Caballero’s bill includes the labor language the Trades proposed from the start. If the two groups do come up with a compromise, it’s unclear whether both bills will reflect that.

Scott Wetch, a lobbyist who represents about 150,000 electrical workers, plumbers and sheet metal workers within the Trades and opposes the bill, isn’t optimistic about an agreement. With dozens of lawmakers exiting the Legislature this year, the voting dynamics are much more unpredictable than in years past.

State and local Trades councils have contributed $1.5 million to political candidates while carpenters groups have given $1.3 million, according to a CalMatters analysis of the 2022 races so far.

“Unfortunately, I think it’s going to come down to a big, giant floor flight in the Senate,” Wetch said.