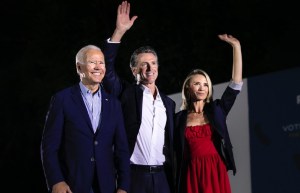 President Biden campaigns with Gov. Gavin Newsom and his wife Jennifer Siebel Newsom in Long Beach in 2021. Courtesy of the Newsom campaign

The Berkeley IGS Poll released Friday found that 61% of voters oppose a second Biden term, and 25% of Democratic primary voters picked Newsom as either their first or second choice should Biden not run.

“Despite denials that he will become a candidate for president in 2024, Gov. Newsom emerges as one of the leading contenders in his home state should Biden not run,” according to the pollsters.

Donald Trump fared even worse than Biden, with 71% of voters polled opposing a third race by the former President. But among just Republican voters, who are a minority in the state, Trump is the 2-to-1 favorite.

The poll was conducted online in English and Spanish Aug. 9-15 among a random sample of 9,254 registered voters across California.