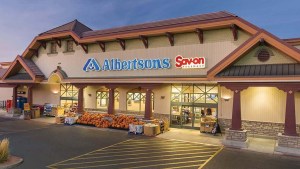 The Albertsons on West Valley Parkway in Escondido. Courtesy of the company

The United Food and Commercial Workers union, representing more than 700 pharmacists and pharmacy workers at Ralphs, Vons, Albertsons and Pavilions stores in Southern California, has rejected the latest contract offer from employers.

The UFCW, representing seven locals, said in a statement released Wednesday the contract did not meet the needs of the majority of their members.

“While we are working with a federal mediator to return to the bargaining table with these employers and secure the contract our members deserve, we are ready to take all necessary action to make sure our members’ voices are heard,” the UFCW said in a statement.

The union members, following an “overwhelming” vote on Saturday, authorized union leadership to call for a strike. No dates have been set for a strike and negotiations with the stores have continued.

UFCW has filed Unfair Labor Practice charges against the stores with the National Labor Relations Board, claiming they have engaged in “unlawful and unfair treatment.” The accusations include retaliation against pharmacists who engage in union activity, attempting to bribe pharmacists with bonuses rather than negotiating wage increases and hiring temporary workers to undermine union activity.

The seven locals make up the largest union grocery contract in the country.

“Southern California’s essential pharmacists have made their voices heard with this vote,” the union locals said in a joint statement Friday. “This vote gives union leaders the authorization to call for a strike and lays the groundwork to allow more than 600 pharmacists across California to stand up to protect their rights and ensure they have the ability to effectively serve their patients and communities.”

John Votava, a spokesperson for Ralphs, has told CNS the store is continuing to negotiate in good faith and that the strike authorization does not mean there will be a strike or work stoppage.

“Our company is committed to continue to negotiate in good faith with the union locals until an agreement is reached that meets the needs of our pharmacy associates and ensures our customers have access to affordable medicines while keeping stores competitive,” Votava said.

Votava called the Unfair Labor Practice allegations a “fear tactic UFCW can use to call a strike and cause disruption for our company, associates and communities.” He said the National Labor Relations Board has not investigated the claims.

“Ralphs follows the law and has not been notified of any wrongdoing,” Votava said.