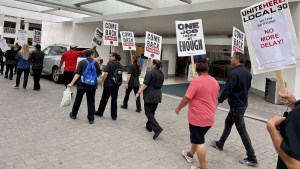 Workers picket outside the Hilton Bayfront San Diego on July 8. Courtesy of the union

Some 600 union hotel workers at the the Hilton Bayfront San Diego went on strike Wednesday morning just a day before Comic-Con begins.

“We can’t allow hotel workers to continue suffering in a billion dollar industry,” said Brigette Browning, president of Unite Here Local 30. “These workers are ready to fight for what they deserve.”

Workers are seeking a $4 per hour raise that would phase in over two years, but management countered with $2.50 over 18 months.

Last week Mayor Todd Gloria called for the workers to receive a “fair contract” in the aftermath of the pandemic.

“These workers deserve a fair contract with pay, benefits, and hours that reflect that their work is essential to the health of San Diego’s economy,” he said.