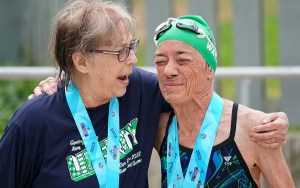 Shaleen Martel had important news in 2019. Her father figured she was going to announce a second pregnancy.

Instead she asked him to open a box in front of her extended family. Inside was a small plush kidney with a message: I’m a donor match.

Martel dismissed doctor’s advice that she couldn’t donate a kidney to her father who had been on dialysis for 22 months. Two months after the announcement, Gerald Wayman received his daughter’s kidney near Father’s Day.

Shaleen Martel, who donated a kidney to her father, wins her 100-meter heat. Photo by Chris Stone

It was “very emotional,” Wayman said. He hadn’t known she had submitted to match testing.

Tuesday, Wayman, 59, was resting between shot put throws at the track and field competition of the Transplant Games at UC San Diego. Her daughter had just finished first in her 100-meter dash heat. This was his third Transplant Games.

Doctors had told Martel and her seven siblings that they couldn’t donate because the kidney disease that affected her father might be hereditary.

Gerald Wayman shows appreciation to his donors on his back as he climbs out of the pool. Photo by Chris Stone

“His health was declining so bad,” the daughter said. “I just decided that I wanted to see if I could plead my case, in front of the doctors, and just say: You know what — it’s a 50-50 chance if I have the same disease or not. But I want to do that for my dad, right?”

His neighbors held a yard sale to pay for Martel’s airfare for the procedure — from Wisconsin to Utah.

Gerald Wayman, whose daughter donated a kidney to him, throws the shot. Photo by Chris Stone

It wasn’t Wayman’s first transplant. In 2007, his brother Lynn donated a kidney. In 2013, his cousin Nick Anderson, who died suddenly from a brain aneurysm, provided his second.

Organ recipients, donors and families of deceased donors gathered in San Diego for the Transplant Games to show their extended life after near death and what they happily were still able to do.

The games — which ended Wednesday — have offered camaraderie with fellow recipients and donors and have given them a chance to exchange experiences.

Asked what she would say to people considering being a donor, Martel answered: “I would say, Please do it. You know, it’s the most wonderful thing that you could save a life, and I would do it again in a heartbeat.”

“It just means the world that I get [to have] my dad here.”

Recipients repeated that donors are their heroes and expressed their gratitude.

Kelly Scidenkranz’s husband, Patrick, calls her a “walking miracle.” Actually on Monday, she was a tennis playing miracle.

Two years after a massive heart attack that required a new heart and kidney, Scidenkranz was playing tennis singles.

That is pretty miraculous because she had flatlined two times, and doctors gave her a 1% chance of survival at first because of near 100% blockage of a coronary artery.

After her singles competition, she had her eye on tennis doubles, a 5K fun run and a cycling event. She said she is playing to honor her donor family.

Her gratitude to her donor is ongoing.

“I think about my donor family every day and the grief that they’re going through, said the 51-year-old Santa Clarita resident. “And every anniversary for me is a painful anniversary for them.”

A donor’s contribution is “something that just gives so much more value to their life,” she said as her husband and two children watched beside a tennis court. “And it’s a legacy that lives on and on and on.”

“I don’t think there’s anything better anybody could do than decide to give that gift,” said Scidenkranz, a Spanish teacher at Canyon High School. “It’s the greatest gift there is.”

Missy Peterson got out of the pool after her 50-meter backstroke competition. Despite the words “double lung” written on her swim cap, she has only about 50% lung capacity.

“I just kind of power through and try to do the best that I can,” said the 49 year-old from Rapid City, South Dakota.

After swimming nearly every stroke, she still looked forward to bowling and darts in the coming days.

Peterson received her new lungs in 1996 and has been in chronic rejection for the past 10 years.

She took up swimming following her transplant and recalls “nearly drowning” in her first race. But she persisted and now loves it.

The games, held every other year, are a chance to connect with fellow recipients who have become friends.

She’s so excited she can’t sleep as she prepares to travel to the games.

When Peterson awakened after her surgery, all she thought of was taking her first breath with her new lungs, she said.

“But also I was thinking about the fact that — that was the tough thing — that somebody had to die for me to live,” she said. “And that’s what these games are about is showing the world that these organs are not going to waste.”

“We are here. We’re working,” Peterson continued. “You know, we’re doing things with these organs. And we want to promote organ donation awareness through these games, and show people what we can do with the gifts that we’ve been given. Oh, that’s wonderful.”

‘One of the Elite’

Debbie Ramsey of Zion, Illinois, was waiting with others outside the pool area Sunday after a medical emergency delayed and then canceled the remainder of the swim competition.

“I’m one of the elite,” said Ramsey, who has survived with a new kidney for 37 years. “It’s called a Quarter Century Club, and anybody with [a] transplant for 25 years and more, you join the club.”

She felt a night and day difference right after her transplant. After years of being on Prednisone, she has some side effects.

“But you know what, I’d rather be alive and yeah, you know, I’m really happy,” Ramsey said.

And while she works out in the pool at the YMCA in Kenosha, Wisconsin, the biennial event gives her a sense of end-game to her exercise. It’s the culmination of hard work, she said.

Kathleen Gerlach, 67, of Long Island puts the donations into perspective.

“All of these 5,000-6,000 people that are here would not be here today (without the donated organs),” she said. “Imagine that. Me being a high school art teacher. I have to think over my 32 years that I affected my students in some way.”

She’s had two transplants: a kidney from a cadaver that lasted 30 years and her current one that’s kept her alive for 17 more.

Donors give to family members, co-workers, friends and strangers.

So recipient Gerald Wayman has some advice.

“When you’re a teenager and you’re having those quarrels with your brothers and sisters, remember one day you might need them,” he said. “So be nice.”

To donate money or learn how to be a donor, go to https://www.donatelife.net/.