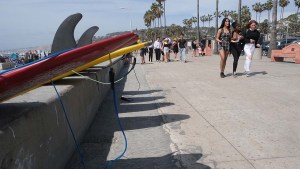 Strengthening high pressure to the east will bring warmer weather through this weekend, the National Weather Service said Wednesday.

Increasing monsoonal moisture will bring a slight chance of afternoon and early evening thunderstorms to the mountains and deserts beginning on Thursday and continuing into early next week.

The forecast remains on track as a few isolated thunderstorms

will be possible over the mountains & adjacent deserts beginning tomorrow afternoon, and lasting each day through Monday. Remember when thunder roars, go indoors! #CAwx pic.twitter.com/ZkzEgQ4wyA

A weak trough of low pressure near the West Coast will bring slight cooling for the early and middle part of next week with a little drying, forecasters said.

Night and morning coastal low clouds and fog won’t extend inland much past the coastal areas for the weekend.