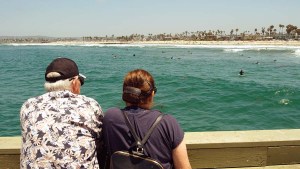 Cooler conditions in San Diego County were forecast for Sunday with night and morning low clouds and fog continuing at the coast and in portions of the western valleys, the National Weather Service said.

Breezy conditions were expected through the passes, mountains and in the deserts Sunday.

Low clouds were continuing to scatter at 9 a.m. in the inland valleys, and Sunday has potential for more widespread clearing at the beaches, forecasters said.

High temperatures along the coast Sunday are predicted to reach 72 degrees, 71 in the western valleys, 71-76 near the foothills, 71 to 81 in the mountains and 94 to 99 in the deserts, according to the weather agency.

We've been fully in May Gray the last few days, but soon we will be back to sunny skies and warmer temps

Temps will begin to warm up on Sun, with further warming expected Mon-Wed. The coast will continue to remain cooler in the 70s.

A ridge of high pressure may start to move east from the Pacific, replacing the trough of low pressure that has been bringing cooler, cloudier and breezy conditions. This ridge could support a warming trend through Wednesday or Thursday.

The warmest days of the week were expected to be Wednesday west of the mountains and in the high desert and Thursday in the low desert.

During the peak of the heat, the coast was predicted to be in the 70s, the inland valleys in the 80s, the high desert in the mid-90s, and the low deserts at 102 to 107 degrees. Night and morning low cloud coverage could become more confined to coastal areas and portions of the western valleys for the majority of the work week.

By Friday, the ridge was expected to move east. There could be some degree of cooling, increase in cloud coverage, and increase in westerly winds in the mountains and deserts next weekend.

No hazardous marine conditions were expected through Thursday.