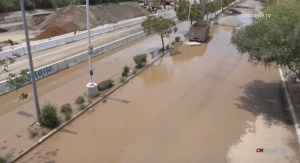 A portion of Friars Road near SeaWorld was closed throughout the day Saturday due to a morning water main break.

There has been ongoing major construction work from Napa Street to Sea World Drive along Friars, according to OnScene.TV. At about 7 a.m. Saturday, the water main broke and started to flood the street.

More than five hours later, city workers were trying to locate the break, but the water flow had stopped.

At times, there was approximately six to eight inches of water on the street due to the break.

The city reported via Twitter that debris affected eastbound Friars near SeaWorld because of a failed joint on a 16-inch PVC water main. Workers expected to reopen the road around 6 p.m.

The water leak did not impact any businesses or residential customers, the city said, and service on the San Diego Trolley line continued.