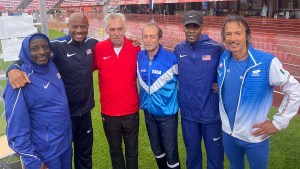 The world record holder in the long jump, now 58 and competing in poor weather Wednesday at the world masters track championships in Finland, took a single leap and called it a day.

“I aggravated my groin on my first attempt,” he told Times of San Diego. “The weather has been great, but today it [was] cold and raining, which didn’t help much.”

The same adductor group of muscles hobbled Powell at the 1996 Atlanta Olympics, where he took fifth. Rainy weather in New Zealand short-circuited his world age-group record attempt in 2017.

Becatti, overcoming his own recent injuries, took the world title in Tampere, Finland, with a mark of 20-6 3/4, even though he was among the oldest in the 28-man field at 59.

“Since I knew about Mike’s challenge, I tried as much as I could,” Becatti said via Facebook. “Before Tampere, I had two competitions where unexpectedly I got at 6 meters (19-8) again. This result pushed me to do my best in this meeting.”

Becatti said rain tainted the competition “not the whole, but in big part.”

Finishing fourth a centimeter behind the Norwegian was Antonio Palacios of Bloomington, Indiana. In sixth was Alan Sims of Cypress, Texas, at 18-3.

“Of course I’m disappointed,” Powell said, “but I had a lot of fun and made many new friends. They encouraged me to come back! It was a great experience!”

In fact, he said he cheered on his rivals and got the crowd fired up for them.

“They thanked [me] for trying along with many autographs and pictures,” said Powell, who jumped at 186 pounds (well under his post-Olympic peak of 217).

“I felt good actually,” he said. “I was worried about my hamstring, I think I overstretched, which made me vulnerable for injury. I did the same thing in Atlanta 1996.”

USA Track & Field described his past misfortune: “Powell won Olympic silver medals in 1988 and 1992, and was the dominant long jumper in the world in 1993 and 1994, winning 34 competitions in a row.

“Powell entered the 1996 season hoping to win a gold medal at the Olympic Games in Atlanta. He was forced to enter the competition with a frayed groin muscle that ripped during his last attempt in the final.”

Powell says a lot of his fellow jumpers thanked him for taking part, “which I appreciated. I won’t give up. I don’t think (friend and Carlsbad resident) Willie Banks would let me!”

His next chance on the world stage could be in late March 2023.

That’s when World Masters Athletics will stage its indoor world championships in Toruń, Poland. (The meet had been awarded to Edmonton, Alberta, but the Canadian city was forced to cancel due to the pandemic and “diminished local financial support.”)

“I’ll decide later,” he said. “I haven’t competed indoors very much. But I won’t rule it out. Especially if Willie is going.”