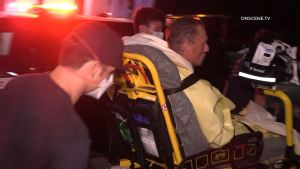 The stabbing victim is taken to an ambulance. Courtesy OnScene.TV

A 32-year-old man is in the hospital Saturday after being stabbed during an argument in the Oak Park neighborhood of San Diego.

San Diego Police officers responded at 9:45 p.m. Friday to 54th Street and University Avenue where they learned a man allegedly approached the victim and his girlfriend standing outside a silver BMW and began talking to the girlfriend, said Officer Robert Heims.

The victim and suspect began arguing and the suspect stabbed the victim in the left side of his chest, Heims said.

The victim was taken to a hospital with non-life threatening injuries, police said.

The suspect was described as being in his 20s with black hair and tattoos on his chest. He was shirtless and wearing blue jeans.

Detectives from the department’s Southeastern Division are investigating the stabbing and anyone related to it was asked to call 619-527-3500 or San Diego County Crime Stoppers at 888-580-8477.