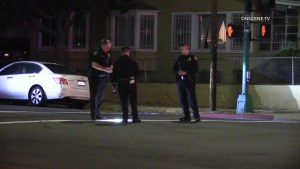 Officers respond to a shooting near a Teralta West intersection. Photo credit OnScene.TV

The shooting was reported at 1:47 a.m. Sunday on 43rd Street at Orange Avenue, said Officer Robert Heims of the San Diego Police Department.

The victim was taken to the hospital with serious injuries, the officer said.