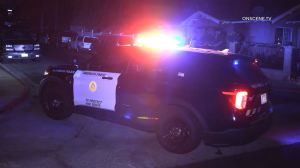 A 38-year-old man was seriously wounded Sunday evening after shots rang out in the Valencia Park neighborhood of San Diego.

A woman called San Diego Police at 9:55 p.m. to report she heard 10 to 12 gunshots and that her neighbor had suffered a chest wound, said Officer John Buttle. The witness said the gunman had fled in a vehicle.

Arriving officers began life-saving efforts, and paramedics took the wounded man to a hospital. His injuries were life threatening but police said he is expected to survive.

A woman standing next to the victim was not hit, but her vehicle was struck.

Police found 13 shell casings at the scene of the shooting in the 5800 block of Duluth avenue.

No descriptions of a suspect or suspect vehicle were immediately available.