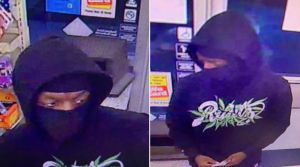 Surveillance image of the suspect in a series of deadly shootings at 7-Eleven stores in Southern California. Courtesy Brea Police

With a manhunt continuing for the assailant who robbed a series of Southern California 7-Eleven stores, killing two people and injuring at least three others in the process, the convenience store chain offered a $100,000 reward Wednesday for information leading to the gunman.

The company “is offering a $100,000 reward for information that leads to the arrest and conviction of the suspect,” according to a 7-Eleven statement. “Tipsters may remain anonymous by contacting Orange County Crime Stoppers at 855-TIP-OCCS.”

The rash of violence — carried out on July 11, or 7-11 — prompted the 7-Eleven corporation to recommend that Los Angeles-area stores temporarily close their doors Monday night and again on Tuesday night.

#PressRelease #Update#SantaAnaPD has identified 24 year-old, Matthew Rule, as the victim of today’s homicide at the 7-11 parking lot. Matthew was a resident of Santa Ana.

Homicide Detectives are continuing their investigative efforts into the homicide. pic.twitter.com/AiOXVRmeZe

“Our hearts remain with the victims and their loved ones, and our focus continues to be on franchisee, associate and customer safety,” according to a company statement Tuesday. “With that in mind, we have encouraged stores in the Los Angeles area to close again tonight.”

Investigations were continuing in six cities, but the same suspect may have been involved in a crime spree that stretched from San Bernardino County, to Riverside County, then to Orange County — all involving 7-Eleven stores.

The first 7-Eleven holdup in the crime spree may have occurred in Ontario. Police said just after midnight Monday, the 7-Eleven at 636 N. Vine Ave. was robbed. The suspect held up the store with a handgun, but no shots were fired and no one was injured, police said.

At 1:50 a.m., a 7-Eleven store at 5102 La Sierra Ave. in Riverside was robbed by a gunman. That robbery escalated, with the suspect shooting a customer, who was hospitalized in what was described as grave condition.

“The suspect entered the store, brandished a firearm and robbed the clerk, then shot a customer before fleeing the store on foot,” Riverside police Officer Ryan Railsback said.

Santa Ana police said 24-year-old Matthew Rule of Santa Ana was fatally shot at 3:25 a.m. Monday outside the 7-Eleven store in the 300 block of East 17th Street. Police found Rule in the parking lot with a gunshot wound to the upper body, Santa Ana Police Department Sgt. Maria Lopez said. The victim was pronounced dead at the scene.

The suspect apparently never entered the store in Santa Ana and it appears he robbed Rule, Lopez said. It wasn’t clear if Rule was a customer of the store or why he was there, Lopez said.

Brea police said they responded at 4:17 a.m. Monday to the 7-Eleven store at Lambert Road and North Brea Boulevard and found a male store clerk fatally shot in what officers determined to be a robbery.

About a half-hour later, the 7-Eleven store at 381 E. Whittier Blvd. in La Habra was robbed, and two people were shot, according to La Habra police Sgt. Eric Roy. Both victims were taken to a hospital, and both were expected to survive. Police said the victims were a clerk and a customer.

Based on surveillance images, police have said the same suspect is believed to have been involved in the heists in Riverside, Santa Ana, Brea and La Habra. Investigations were continuing in the San Bernardino County robberies.

Meanwhile, the Los Angeles Police Department announced Tuesday afternoon that detectives are investigating a similar string of robberies at two convenience stores and two doughnut shops within the LAPD’s Devonshire Division in the San Fernando Valley that occurred between 3:55 and 5:30 a.m. Saturday.

The suspect in those four robberies was described as a man between 25 and 30 years old, 5 feet, 7 inches to 5 feet, 10 inches tall and weighing 160 to 180 pounds. He was last seen wearing a black hooded sweatshirt, a black face covering and dark jeans, and was armed with a black semi-automatic handgun.

No injuries were reported in the robberies, and LAPD detectives were working with other agencies to determine if the suspect in the four robberies may be linked to Monday’s 7-Eleven heists.

The Brea location where Hirsch was fatally shot was one of several stores that opted to close Monday evening and early Tuesday morning. Yellow police tape was strung along the parking lot in the early morning hours and a makeshift memorial next to the parking was created for Hirsch.

Anyone with information was asked to call Brea Police Department Detective Alfred Rodriguez at 714-671-4438 or alfredr@cityofbrea.net.