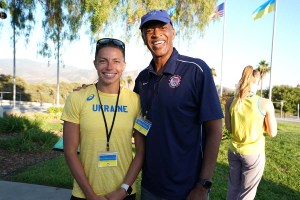 Olympic hopefuls training in poverty. Living out of their car. Trolling for sponsors on Twitter.

Willie Banks, who recounts how he once rolled up $100 from meet directors and hid the cash in his pocket, knows the financial hurdles of elite track and field.

But in a startling revelation a week shy of the World Athletics Championships in Oregon, the Olympic triple jumper said the sport’s national governing body is mulling how to put top performers on the payroll.

“I am not at liberty to give you the plan right now,” he said.

But USA Track & Field, where he’s a board member, is discussing “making a … direct investment in our athletes, meaning payments — a living wage to our athletes,” he said.

Banks, the Carlsbad resident who held the world record in the triple jump for 10 years, outlined the concept to Times of San Diego and veteran Olympic reporter Mark Zeigler of The San Diego Union-Tribune.

In a 20-minute chat during the Ukrainian track team reception in Chula Vista, Banks said the athlete payments would derive from revenues of USATF, corporate sponsor and USATF Foundation grants (which until now has handed out stipends of $5,000 and less).

“We have got to make that investment,” he said Thursday. “If we don’t get our athletes to a level, then we will never grow the sport.”

In 1994, Banks was deputy venue director for the Pasadena Rose Bowl as the championship site of the FIFA World Cup.

“There was no [Major League Soccer],” he said. “But we started to develop the MLS, and when we got to where the MLS was going to take off, we realized that … we had to give our athletes a base salary … like other sports.”

He says a base salary for track athletes is in the works — for those who achieve a certain performance standard.

But not collegiate athletes.

“It’s no use supporting an athlete who is competing at the NCAAs because they have certain rules,” Banks said in a wide-ranging interview about the health of the sport.

Professional runners, jumpers and throwers usually count on shoe companies like Nike, Puma and adidas to support their full-time livelihood. But details are sketchy and stars are mum on details.

(Recent PUMA Running recruit Abby Steiner, the NCAA and USATF 200-meter champion out of Kentucky, rebelled at reports she was getting $2 million, saying “invasive and bothersome narratives” add to her stress and mental-health challenges.)

An age-old debate is why track and field is sagging in fan appeal while drawing the most participants act the high school level.

Banks tackled the issue with reporters at the Chula Vista Elite Athlete Center. He noted being chairman of the World Plan Working Group of World Athletics, formerly IAAF.

A member of the 26-person World Athletics Council, he cited last year’s unveiling of a 28-page World Plan for Athletics 2022-2030.

It’s the “ambitious” result of a survey of 25,000 people in 178 countries, “setting metrics for the 67 actions against which we can benchmark progress … allowing each [national] federation to set their own prioritisation and timeframe and focus on areas which will deliver meaningful growth in their country,” says WA President Sebastian Coe.

Banks admits being “a little depressed” to see Hayward Field stands a third full at the recent NCAA and open national championships in Eugene, Oregon — the qualifying meet for the World Championships starting Friday.

But he insists that Oregon22, as the world meet is branded, will kickstart a revival of track’s fortunes — and fan base — in America.

“It is the springboard,” he said of Eugene. “And it’s all planned, and boom. Just like in 1994, we all planned that the … World Cup would be the springboard for soccer in the United States and look at this place — everybody know soccer now, right? It’s gonna happen.”

Not so sure is another former world record holder.

Dwight Stones, 68, who set his first high jump record 49 years ago Monday, doubts a cure is at hand.

“If you and I could come up with the answer to this, we could make a lot of money,” the Orange County resident said in a phone interview. “It’s so many things.”

The longtime track sportscaster and commentator bemoaned NBC’s “stranglehold on the sport” through 2032.

“They do not like track and field,” Stones said. “And let’s face it. If you’re looking at it from the standpoint of a producer who really has no legacy of any kind, didn’t run track, didn’t enjoy track, isn’t a spectator — it’s a pain in the ass to cover.”

USATF Foundation had only $1.7 million in net assets at the end of 2020, raising $8 million over five years. (PDF)

He notes how the three-ring circus of a meet requires a lot of equipment and personnel.

And then live TV has to deal with false starts, complicated rules and nuances like “wind-aided,” misses and passes, fouls and out-of-sector throws.

“They [NBC Sports] detest the sport and they really hate field events,” he said.

That’s because field events are not predictable the way track races are.

“And the high jump and pole vault in particular — you don’t know how high they’re going to jump, how long it’s gonna take,” Stones says. “They’re outside the [live broadcast] window. And they’re talking to the meet director: ‘Why don’t you move that pole vault up about 30 minutes? It’s gonna take a long time.’ Now you’ve got a conflict with the meet director.”

Stones wishes track could emulate team volleyball, whose games once “took forever” because points could be scored only when a team served.

But with the introduction of rally scoring, “now it’s predictable. Now we know it’s not going to last beyond this amount of time.”

Volleyball figured this out themselves, he said. Track hasn’t.

“They have these died-in-the-wool purists who are way up in the organization who absolutely won’t do it,” he said. “Can you imagine if they didn’t innovate in baseball or football? Do you think they’d be as popular as they are?”

He answered his own question: “They wouldn’t be. But we for some reason have decided to continue to do old-school, and it’s to the detriment of the sport.”

He cites the jumps as examples where potential rule changes would speed up the event and make them more fan and TV friendly.

“Why are we still having fouls in the long jump and the triple jump? Why are we fixated on this [takeoff] board?” Stones said. “Why do we measure jumps from the end of that board — so that all the athletes are trying to get as close to that thing as they possibly can? Why are we not measuring how far they actually jump?

“We have the f–ing technology. We use it in garages and elevators.”

One such foul at a 1982 Indianapolis meet was widely seen as a mammoth world record.

“I saw it,” Stones said of the Carl Lewis leap. “We know it’s over 30 feet… It’s one guy saying: ‘I saw his toe over the board’ — and they raked the mark and that was the end of it. Greatest long jump performance in history — gone.”

“In championship competitions, 42% of men’s long jump attempts are fouls,” he said. “That is a huge waste of time, and effort. You’ve got to rake the damn [pit]. The audience is … pissed off.”

For 30 years, Stone says, he’s been writing about how the long and triple jumps should measure actual jumps — not just from the board.

In the high jump and pole vault, he says, a laser beam above the bar can be used to break ties (based on equal misses).

He says he’s seen Tokyo Olympic champion Mutaz Essa Barshim of Qatar — with a best of 7 feet 11 1/2 inches — soar over the world record of 8-0 1/2 while clearing a lower height.

“You could flash it up there,” Stones said. “He cleared [the bar] at 2.37 [meters] but what he actually cleared was 2.41. That would be interesting and engaging in the pole vault and the high jump for the audience.”

Another example is Tokyo Olympic champ Armand “Mondo” Duplantis in the pole vault, who recently set an outdoor world best of 20-2 “but actually cleared 20-8.”

“The journey is on for 21 feet for that kid,” said Stones, who won bronze at the 1972 Munich Games at age 18 (and again at the 1976 Montreal Olympics). “Don’t tell me he can’t do it. The only chance he wouldn’t do it is injury, which is always on the table, or boredom. He’s so much better than everybody else.”

On that, Banks would agree: Track should leverage the star power of Mondo and others.

He hails “a new crop” of track stars like 400-meter hurdler Sydney McLaughlin (setting world records three times in the past year).

“They have class, have personality, people love them,” he said.

Banks defends Eugene — with its space-age-but-pricey new track stadium — as the host of recent major meets.

“We have to give back,” he said. “And putting all those events [at Hayward Field] is … giving back.”

He says leading up to the Los Angeles Olympic Games in 2028, “we’re going to have many, many events where we can dole them out to the different stadiums and different communities.”

“We’re going to have new events — shot put where people can actually see it. We want to bring our sport to the people. But more than that, we want to make it fun and exciting so that we’re not just looking at track fans, we’re looking at fans.

Banks says American track is in better shape than it was several decades ago because of a longterm infusion of $500 million from Nike and the emergence of “young, good-looking, smart athletes that are capturing the imagination of the United States.”

He hails the role of women in the sport.

“Allyson Felix, yeah, she’s may not be one of the young ones, but she has really made this sport special, because people relate to her. When I was competing, [athletes] weren’t bringing their babies out. Even as a mother, you can be a gold medalist. We didn’t do that.”

American women have “opened” up the sport, he said.

“Remember when Eastern European women just controlled track and field? Not anymore,” Banks said. “It’s the U.S. And our U.S. women, who have made this sport huge. Granted, it started way back with Evelyn Ashford, Jackie Joyner-Kersee and of course Flo-Jo. But once that hit — boom, it just took off. And now we have people going on ‘Dancing with the Stars.’ … real-live, big time media events.”

He says women are part of the sport’s growth “that people don’t see.”

“But I see it because I’ve been around and looking at this and saying: We’re finally getting there,” he said. “The next step is to come, and it will happen between now and 2030.”

Stones, whose wife urged him to stay in the sport through the 1984 Los Angeles Olympics (the year he jumped his highest — 7-8), says track is down worldwide.

“Even the crowds in Europe are down,” says Stones, who recalls competing in full stadiums there. “And it’s because all the other sports found a way to  make themselves more popular.”

With more competition for the entertainment dollar, track isn’t keeping pace, he said.

“And until we are, which I don’t see happening in my lifetime, it’s going to continue to be the same old refrain.”