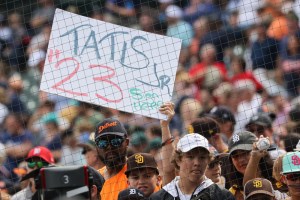 DETROIT, MI – JULY 27: Fernando Tatis Jr’s. fame extended far beyond San Diego. A fan held up a sign asking the Padres infielder for an autograph at the end of a game between in Detroit last month. At Comerica Park in Detroit. (Photo by Scott W. Grau/Icon Sportswire)

Padre Fernando Tatis Jr. continues to face the consequences of his 80-game suspension for use of a performance-enhancing drug as a major company severed ties with him.

ESPN reported that Adidas had dropped Tatis. A company representative acknowledged the development, telling ESPN, “We believe that sport should be fair. We have a clear policy on doping and can confirm that our partnership with Fernando Tatis Jr. will not continue.”

Tatis, 23, both talented and charismatic, attracted a bevy of endorsements quickly, from Adidas (see the February company tweet featuring the star shortstop, below), which launched a shoe, Ultra Boost DNA, for him, to Gatorade and Dairy Queen.

He also snagged the coveted cover spot on the popular “MLB The Show 21” video game.

Baseball announced Tatis’ suspension Aug. 12 for use of the banned substance, Clostebol. He said he used the drug unknowingly as part of a treatment for a skin condition.

Tatis, who had been nearing his return from a fractured wrist when the suspension came down, met with teammates at Petco Park Tuesday and spoke to the media.