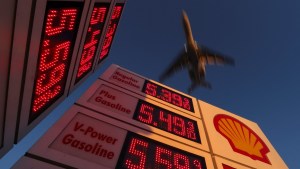 An aircraft flies over a sign displaying current gas prices as it approaches to land in San Diego on Feb. 28, 2022. REUTERS/Mike Blake

The average price of a gallon of self-serve regular gasoline in San Diego County dropped Friday for the 44th consecutive day since rising to a record, decreasing 2.3 cents to $5.599, its lowest amount since March 8.

The average price has decreased 77.4 cents during the streak, including 2.5 cents Thursday, according to figures from the AAA and the Oil Price Information Service. The streak of decreases follows a run of 19 increases in 20 days totaling 35.5 cents.

“Prices are continuing to drop locally and there are now several dozen stations in Southern California with prices below $5 a gallon.”