Aztecs Get Taste of Snapdragon Stadium in Annual Preseason Scrimmage 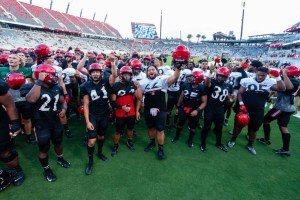 Season ticket holders and special guests – along with the Aztecs – enjoyed the action at Snapdragon Stadium as San Diego State played in its annual preseason scrimmage.

Officials held a ribbon cutting Friday ahead of Saturday’s scrimmage, with the first game at brand new Snapdragon two weeks away.

“It was good to get out here and get acclimated to where you are at and the different things,” said Aztec head coach Brady Hoke. “It’s a great venue, obviously. It was good to be here, nice to have families in attendance. I know our guys really enjoyed that part of it.”

Phillippe Wesley II led a productive SDSU receiving corps with five catches for 79 yards, while Brionne Penny finished with three receptions for 36 yards, and a pair of touchdowns.

In addition, Jesse Matthews had four catches for 64 yards, while Darius De Los Reyes hauled in another for a score. The Aztec offense accounted for 24 points on the day.

After three unsuccessful drives to open play, SDSU put numbers on the board with a 26-yard field goal by David Delgado with 1:18 remaining in the first quarter, capping an eight-play, 64-yard march.

Fifty yards of those gains came on consecutive plays, with Will Haskell scrambling 18 yards down the left sideline on 3rd and 5, and Cam Davis adding a 32-yard burst down to the opposition 11.

Later in the second quarter, Kyle Crum connected with Penny on a 25-yard touchdown pass at the 6:43 mark, culminating a five-play, 63-yard drive that consumed just 2:07 on the clock.

With the Aztecs fine-tuning their offense with red zone work in the fourth quarter, the Crum-Penny duo hit pay dirt again, this time from six yards out at the 8:20 mark, while Liu Aumavae tossed an 18-yard touchdown pass to De Los Reyes moments later.

Transfer Braxton Burmeister directed the Aztecs’ opening march of the afternoon, completing two passes to Matthews, including a 39-yarder down the right sideline to set up Jack Browning’s 32-yard field goal attempt that sailed wide left.

After two years of hosting home games in Carson during the Mission Valley stadium construction, Matthews called it “so surreal” to be playing in San Diego.

“I was talking to some other guys and I said that I can’t believe that we’re actually back here in this community as well, just to be back home and see the fans here and the atmosphere,” he said. “This is a beautiful stadium that we have. It’s really exciting.”

Now it’s on to the regular season. San Diego State opens its 2022 campaign at 12:30 p.m. Sept. 3, when the Aztecs welcome Arizona to Snapdragon Stadium.