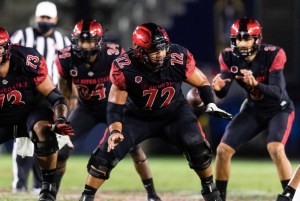 The Football Writers Association of America announced the inclusions this week.

Uluave is one of 18 centers on the initial list of 89 interior linemen, and is one of six players from the Mountain West conference on the list.

The Outland Trophy is given to the outstanding lineman in the country at the close of the 2022 season.

He is one of 40 centers on the initial list and the only player from the MW. He also has been named to the 2022 Rimington Trophy Watch List for the award given to the nation’s outstanding center.

Uluave, named to the MW preseason all-conference team, started all 22 games the past two seasons for the Aztecs at center. He was an honorable mention all-league pick in 2021 after allowing just six pressures (two hits, two hurries and two sacks) in 409 passing chances, according to Pro Football Focus.

McDonald and McMorris are two of 85 defensive players, and two of seven from the Mountain West, on the Nagurski trophy list, which honors the outstanding defensive player in college football.

McMorris, who earned MW preseason co-defensive player of the year, started all 14 games for the Aztecs in 2022. The 2021 MW first-team selection had a team-high 90 tackles (53 solo), including 2.5 tackles for loss, a team-best four interceptions for 61 yards, nine pass breakups and a 15-yard fumble recovery in 2021. McMorris also tied for second in the Mountain West in interceptions.

This is the second consecutive season that McDonald has been named to the preseason Nagurski watch list. He also was named to the MW preseason all-conference team on Thursday, and has started 31 straight games and played in 48 consecutive games for the Aztecs dating back to 2018.

The two-time first-team all-MW honoree recorded 49 tackles (21 solo), including three sacks for 22 yards and 6.5 tackles for loss of 28 yards, seven quarterback hurries, two pass breakups and a blocked PAT in 2021.

SDSU finished the season with a school-record 12 victories last season, while playing its home games two hours away at Dignity Health Sports Park in Carson. The Aztecs finished the 2021 season ranked 25th in the final Associated Press Top 25 poll.

SDSU opens the new Snapdragon Stadium against Arizona on Sept. 3.