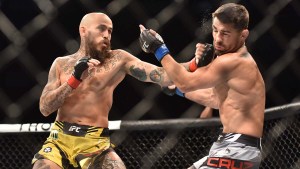 Santee-based Dominick Cruz, fighting blocks from his training venue, fell to Marlon “Chito” Vera of Ecuador in a featured bout Saturday as the UFC octagon returned to San Diego.

Vera made a case for a shot at the bantamweight title after knocking out Cruz in the fourth round of a mixed martial arts bout televised live on ESPN.

It was an impressive effort from Cruz before the end, but Vera never stopped pressing until he got the W. In the co-main event, it was a Fight of the Year contender, as Nate Landwehr outlasted David Onama via majority decision (28-28, 29-27, 29-27) .

Marlon “Chito” Vera’s kick to Dominick Cruz’s head ended the bout in the fourth round. Photo by Chris Stone

Fighting earlier in her adopted hometown of San Diego, Angela “Overkill” Hill came up big with a close but unanimous decision victory at sold-out (12,804 announced attendance) Pechanga Arena over Loopy Godinez in a bout held at a catchweight of 120 pounds.

Godinez rocked Hill with a couple right hands in the opening minute, and she kept firing them, but “Overkill” recovered quickly and fired back in an attempt to take the lead. And as the round progressed, she did just that with a steady rate of strikes, including a flying knee late in the frame.

Godinez opened the second with a takedown, but Hill defended perfectly and got back to her feet almost immediately, resuming her standup attack on the bloodied Godinez, who was even taken down by the striking specialist in the closing seconds of the stanza.

Marlon “Chito” Vera cools himself off after victory. Photo by Chris Stone

For a while, former bantamweight champion Cruz looked to be sailing to one of the most impressive victories of his career in his hometown of San Diego. Vera had other ideas, and he closed the show on the future UFC Hall of Famer, stopping Cruz in their UFC Fight Night main event.

Cruz attacked with a combination to open the fight, and moments later came another one, catching Vera off guard. A quick takedown followed in the second minute but Vera shot right back up as UFC returned to San Diego for the first time since 2015.

A left to the jaw by Vera dropped Cruz and evened the score, but Cruz  was up and back to work a second later. And work Cruz did, as his flurries piled up the points, and so did a takedown in the closing minute. Vera nearly locked in a submission late, but Cruz escaped and was in control at the horn.

A minute into the fourth, there was another flash knockdown for Vera, this time with a straight left. Again, Cruz got up, apparently unhurt, and while he was still moving, he was slowing down as Vera closed in, and with a single left kick to the head, “Chito” closed the show, with Cruz dropping to the mat, his nose broken.

Referee Herb Dean then moved in, with the official time of the finish 2:17 of the fourth round.