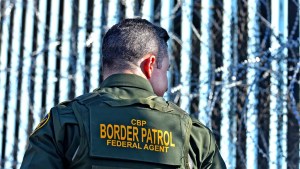 A Border Patrol agent looks at people on the Mexican side of the border fence. Photo by Chris Stone

For the second time in barely more than a month, Border Patrol agents in the San Diego Sector apprehended a large group of migrants from countries far from Mexico and Central America.

Officials said the group of 100 migrants was apprehended around 2 a.m. on Tuesday attempting to climb over the fence east of Border Field State Park.

In two separate incidents in late July, a total 224 people were detained for crossing into the United States near Imperial Beach. Most migrants in those groups were from Brazil.

Of the 145,618 migrants apprehended in San Diego Sector in the 2022 fiscal year, 44,444 consisted of migrants coming from countries other than Mexico, according to a Customs and Border Protection statement.