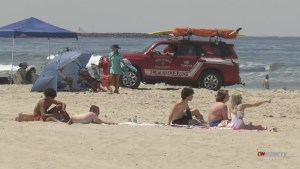 A 12-year-old boy visiting Mission Beach with his family Tuesday was rescued by other swimmers and lifeguards after nearly drowning in the surf, authorities reported.

Several beachgoers pulled the unconscious youth out of the water near Ocean Front Walk and Santa Clara Point at about 11 a.m., according to the San Diego Fire-Rescue Department.

Lifeguards responding to the emergency found that the child had no pulse and was not breathing, SDFRD spokeswoman Monica Munoz said.

The personnel performed CPR and were able to restore the boy’s heartbeat and respiration. An ambulance crew then took him to Rady Children’s Hospital, where he was admitted in critical condition.