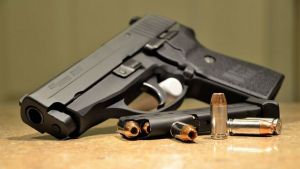 A handgun with a magazine and bullets. Photo via Wikimedia Commons

Gov. Gavin Newsom’s office Thursday announced millions in funding to be committed to a gun violence prevention outreach campaign, which includes $1 million to the San Diego City Attorney’s Office to fund education and training on the use of gun violence restraining orders.

The funding is part of an initiative announced earlier this year focused on outreach and education regarding the state’s red flag laws, which allow for the issuance of gun violence restraining orders in order to temporarily remove firearms from those at risk of harming themselves or others.

The governor’s office says more than 3,000 gun violence restraining orders were issued across the state between 2016 and 2020. Among those, 58 people who threatened to commit mass shootings had their guns removed, Newsom’s office said, citing a study from the Violence Prevention Research Program at UC Davis.

The $1 million to the City Attorney’s Office will go towards training for city attorney offices and law enforcement groups.

“Our office is proud to be able to provide training to law enforcement agencies throughout the state on how to obtain gun violence restraining orders,” said San Diego City Attorney Mara Elliott. “Learning to recognize red flags for potential gun violence is the best way to protect our communities and save lives.”

The governor’s office also announced $5 million will go to the California Partnership to End Domestic Violence for outreach at local community-based domestic violence groups and another $5 million to the Hope and Heal Fund for outreach in California communities “most at risk of gun violence.”

Newsom said in a statement, “California has set the standard for proven gun safety laws that save lives. Every single day, our laws ensure that gun violence remains the exception, not the rule. Our laws have cut gun deaths by half but we’re not stopping there — we’re connecting with communities across our state to share life-saving tools with the families and people who need them most.”