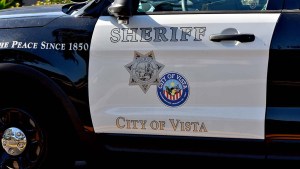 A car veered off a residential street in Vista and plowed into a house Monday, winding up about halfway inside the structure and sparking a small fire but causing no reported injuries.

The traffic crash in the 1100 block of Olive Avenue occurred about 3 p.m., according to the San Diego County Sheriff’s Department.

Firefighters were able to quickly douse the blaze sparked by the wreck, Lt. Pat McEvoy said.

It was not immediately clear why the motorist lost control of the vehicle.