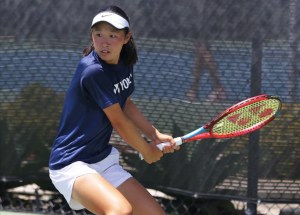 In Saturday’s opening semifinal match, Glozman, 15, overcame a slow start and came back from 0-4 in the first set to stun San Diego’s Katherine Hui 6-4, 6-1 in 85 minutes.

Glozman dropped serve twice early in the first set, but mounted a spirited comeback, winning six games in a row to capture the first set.

The eighth-seeded Hui and Glozman exchanged service breaks to open the second set, but Glozman ultimately dominated the set, winning the final five games to close out the match.

“I had to make a few balls in play, stay in the point a little more and not rush myself too much. I had to wait for the right opportunity to attack,” Glozman said after her semifinal victory.

Yu, 17, dominated the opening set as she dropped only two points on her serve in addition to scoring three service breaks against Pursoo.

In the second set, Yu established a 2-0 lead, but Pursoo won the next two games to even the score. Yu regained the momentum, though, capturing the last four games to finish the match.

“I feel pretty good about my game at this point. I felt confident coming into the tournament. I didn’t have a certain result in mind, but I’m glad to be in the finals,” Yu said.

Wild cards to the 2022 US Open’s main draw, qualifying and junior main draws, will be awarded based on finish at the tournament, including for the top three in the 18s field.

Admission is free and there is no charge for parking at the Barnes center.