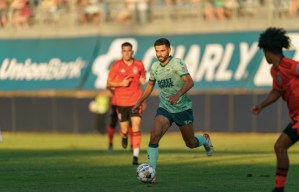 Guido scored his third and fourth goals of the USL Championship Season in the 20th and 45th minutes of Wednesday’s match against the Loyal’s Western Conference rival. The reigning USL champs’ goal came via Milan Iloski as Landon Donovan’s team secured the victory and added three more points to their tally.

Call us what you want, but don't call us boring.

Orange County (4-8-5, 17 points), though, made it 1-1 when Iloski headed in Alex Villanueva’s cross two minutes later.

Both teams played with 10 players from the 36th minute after the Loyal’s Kyle Vassell and Ahmed Longmire were sent off after fighting on the pitch.

The winning goal came after Guido took advantage of a penalty, when the visitors fouled Nick Moon inside the box. The midfielder’s shot hit the right post for his second goal.

SD Loyal’s next home game will be July 9 when they host the LA Galaxy II in a Western Conference duel.

Unreal crowd on a Wednesday… thank you San Diego pic.twitter.com/NcF8OvHfhP