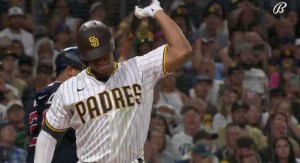 If life was fair, Yu Darvish, after lasting into the ninth inning Thursday, would not have been in the position where he could lose the game against the Washington Nationals.

But it’s not and he was and he did, as the Padres fell 3-1 to open their home stand at Petco Park.

Closer Josh Hader relieved a none-too-happy Darvish, who had given up just three hits over eight innings, after the Nats tagged the starter for two hits to start the ninth.

Hader, though, hadn’t pitched in nine days and it showed. He hit former Padre Luke Voit to load the bases and followed by walking Nelson Cruz, allowing the winning run to score. Washington added a second run on a sacrifice fly by Keibert Ruiz, with both charged to Darvish.

Juan Soto strikes out and the Padres leave them loaded! pic.twitter.com/BmA8z4Pu5o

But the Padres had their shots, particularly in the seventh, and didn’t take advantage.

“We had a chance to open it up with the bases loaded and we just didn’t come through,” manager Bob Melvin said.

The teams traded solo home runs early – Ildemaro Vargas with two outs in the third and Manny Machado with one out the next inning – and the 1-1 tie held up as Darvish and a series of Nationals pitchers took control.

The Padres loaded the bases in the seventh, but the Nationals somehow struck out the side, with Juan Soto the final victim. He took a mighty swing at the final pitch from reliever Victor Arano and slammed his bat down in disgust when he missed.

The Friars’ final chance to get Darvish off the hook came in the ninth when Wil Myers and Ha-Seong Kim walked with one out, but Jurickson Profar hit into a double play to end it.

Melvin said simply of his decision to replace Darvish, “that I have to be right and I wasn’t.”

The Padres send the suddenly hot Blake Snell to the mound Friday, followed by the suddenly not-hot Joe Musgrove, then Sean Manaea.