Deputies in Fallbrook Arrest Man with Molotov Cocktails in His Vehicle 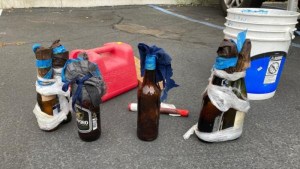 A 30-year-old man was in custody Wednesday following the discovery of Molotov cocktails in his vehicle in Fallbrook.

Deputies responded to reports of a man acting suspiciously in the 200 block of East Fig Street and arrested Jacob Daniel Oberg in the area around 8:30 a.m. Tuesday, according to the San Diego County Sheriff’s Department.

Deputies conducted a search of Oberg’s vehicle and found six Molotov cocktails, a flare and a container of gasoline, which prompted response from bomb/arson teams and the FBI. Authorities have not identified an intended target of the explosives, however, an investigation was ongoing.

On Tuesday afternoon, a warrant was served to Oberg’s apartment in the 33000 block of Jamieson Street in Lake Elsinore.

Oberg was booked into the Vista Detention Facility on suspicion of several felony charges for possessing an explosive device in public.