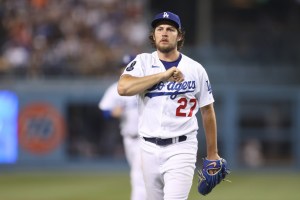 Suspended Dodgers pitcher Trevor Bauer has been hit with a lawsuit for alleged sexual assault filed by the woman who accused him of the purported attack last year – and whom he later sued for defamation, according to court papers obtained Thursday.

The San Diego woman had alleged that Bauer beat and sexually abused her. She later sought a restraining order against him that was denied, and Los Angeles prosecutors said in February there was insufficient evidence to prove the woman’s accusations beyond a reasonable doubt.

In April, Bauer sued the woman, along with The Athletic, Deadspin and the writer Molly Knight for defamation, after his accuser’s allegations became a national news story.

In her counterclaim for battery, filed Tuesday in Los Angeles federal court, the woman again alleges that Bauer punched and choked her on two occasions during sex in 2021.

Bauer has denied the allegations, insisting that he and the woman had a consensual relationship that included “rough sex.”

In the woman’s lawsuit, she claims her “life has been turned into a nightmare by a powerful man who mercilessly battered her and counted on facing no consequences whatsoever for his despicable conduct.”

The pitcher has been suspended for two seasons without pay by Major League Baseball. He has appealed the ruling.