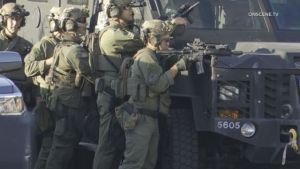 A man who allegedly attacked his uncle with a large combat knife during an argument at their home near Palomar Mountain and then refused to surrender to deputies, prompting a six-hour standoff under the hot summer sun, was behind bars Wednesday.

The assault in the 500 block of Amago Road in Pauma Valley was reported just before 9 a.m. Tuesday, according to the San Diego County Sheriff’s Department.

When deputies tried to contact the suspected assailant, 28-year-old Joseph Raymond Amago, he ran off into a field adjacent to his home, Emig said. After he allegedly ignored repeated orders to disarm himself and surrender, patrol personnel called in a SWAT team.

Crisis negotiators worked through the late morning and into the mid- afternoon trying to persuade the suspect to give himself up peaceably as he stood in the empty lot in the intense midday sunlight.

Finally, shortly before 3:30 p.m., Amago tossed away his military- style knife and was taken into custody without further incident, the lieutenant said.

Amago was booked into county jail in Vista on suspicion of assault with a deadly weapon and displaying a weapon in a threatening manner. He was being held on $30,000 bail pending arraignment, scheduled for Thursday afternoon.