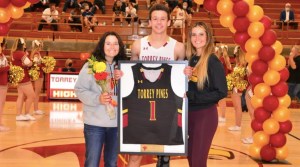 A GoFundMe page to support the family of the late Nick Herrmann, the young basketball player who died of cancer Saturday, has nearly met its goal.

More than 400 donors had given just over $74,000 of the $75,000 goal by Thursday afternoon, a day after Griffin Jimenez, of Torrey Pines’ coaching staff, posted the fundraiser.

The coach said the goal of the page is to support Herrmann’s mother, a nurse at Rady Children’s Hospital. The Union-Tribune reported that her son died there.

“We will miss his unparalleled work ethic, welcoming smile, incredible sense of humor and the love he had for his family and friends,” Jimenez wrote.

Herrmann’s cancer had gone into remission, which allowed him to continue playing at Torrey Pines and help his team win the title.

He had intended to play at Cal State Northridge, but the cancer returned. Despite his illness, he attended Matadors’ practices while undergoing treatment.