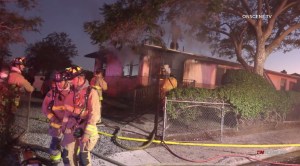 Firefighters at the scene of the Craigie Street duplex fire. Photo credit: OnScene.TV

Flames heavily damaged one unit in a Chollas View duplex Friday evening and led to unfounded fears that a person was trapped inside.

Crews from the San Diego and National City fire departments found heavy smoke and flames coming from the residence in the 4600 block of Craigie Street at about 8:10 p.m. according to OnScene.TV.

Firefighters entered the residence when told of the potentially trapped person, but they found no one inside the burning structure.

The residents fled the fire and one was checked for smoke inhalation by paramedics. There were no reported injuries.

The other unit had smoke damage. Seven people were displaced by the blaze. The cause remains under investigation.