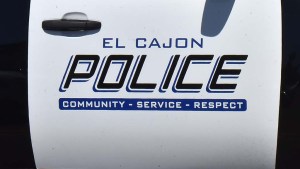 A 32-year-old ex-con was back behind bars Wednesday on suspicion of attacking another man with a knife last weekend during an argument on a trolley traveling through El Cajon, authorities reported.

The victim and his girlfriend were confronted by the alleged assailant at about 9:15 p.m. Saturday while riding the light-rail tram near Marshall Avenue Trolley Station, according to the El Cajon Police Department.

A quarrel ensued, during which the suspect allegedly pulled a knife and stabbed the other man repeatedly, then exited the trolley at Arnele Avenue Trolley Station and fled, ECPD Lt. Randy Soulard said.

Paramedics took the victim to a hospital for treatment of non-life-threatening head and arm wounds.

“With the assistance of surveillance footage from the scene and working with officers from the La Mesa Police Department, detectives from the El Cajon Police Department were able to identify the suspect as Joshua Lee Martinez, an El Cajon resident,” Soulard said.

Martinez was booked into San Diego Central Jail on suspicion of attempted murder.

The suspect is a previously convicted felon who has “an extensive violent criminal history with arrests (for alleged crimes) including possessing a dangerous weapon, domestic violence, robbery, assault with a deadly weapon, assault with a firearm, probation violation and participation in a criminal street gang,” the lieutenant said.