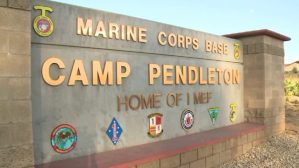 A former Camp Pendleton Marine who drove drunk and caused a wrong-way crash that killed a motorcyclist on a rural Bonsall-area road has been convicted of second-degree murder in his second trial regarding the fatal crash.

Adam Daniel Barooshian, 29, was convicted Monday in a retrial for the New Year’s Day 2019 crash that killed 29-year-old Christopher Williams of Oceanside.

In a previous trial held in early 2020, Barooshian was convicted of gross vehicular manslaughter while intoxicated and DUI causing injury, but the panel was unable to reach a consensus on the second-degree murder charge.

According to prosecutors, Barooshian was speeding eastbound on the westbound side of State Route 76 near Via Monserate shortly before 4 a.m. when his Lexus IS 300 hit Williams, who died at the scene.

Williams, a father of two, was on his way home from his job as a security guard and emergency medical technician at Pauma Casino, according to the Oceanside Police Officers’ Association.

His blood-alcohol content was measured at 0.18%, more than twice the legal limit for driving, according to Deputy District Attorney David Uyar.