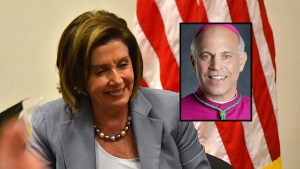 Salvatore Cordileone, now archbishop of San Francisco, wrote the San Francisco Democrat on Thursday, saying he had previously warned her that he had “no choice but to make a declaration, in keeping with canon 915, that you are not to be admitted to Holy Communion.”

A San Diego native who attended Crawford High School and both San Diego State University and the University of San Diego, Cordileone said in a two-page letter to Pelosi: “As you have not publicly repudiated your position on abortion, and continue to refer to your Catholic faith in justifying your position and to receive Holy Communion, that time has now come” to forbid her from receiving communion during Mass.

“I am hereby notifying you that you are not to present yourself for Holy Communion and, should you do so, you are not to be admitted to Holy Communion, until such time as you publicly repudiate your advocacy for the legitimacy of abortion and confess and receive absolution of this grave sin in the sacrament of Penance,” he wrote.

On Friday, the agency reported that Cordileone said the step was “purely pastoral, not political” and came after Pelosi, who has described herself as a “devout Catholic,” repeatedly rebuffed his efforts to reach out to her to discuss her abortion advocacy.

In a 2008 interview with C-SPAN, Pelosi said being denied Communion would be “a severe blow,” describing herself at the time as a “regular communicant,” the Catholic outlet reported.

Cordileone, 65, has been at odds with current San Diego Bishop Robert McElroy on the communion issue.

During that 2021 debate, Cordileone said in a pastoral letter: “When other avenues are exhausted, the only recourse a pastor has left is the public medicine of temporary exclusion from the Lord’s Table. This is a bitter medicine, but the gravity of the evil of abortion can sometimes warrant it.”

After numerous attempts to speak with Speaker Pelosi to help her understand the grave evil she is perpetrating, the scandal she is causing, an the danger to her own soul she is risking, I have determined that she is not to be admitted to Holy Communion. https://t.co/l7M85CyG86

Saying such a ban could cause substantial damage to the Catholic Church, McEloy wrote that a prohibition would weaponize Communion — the delivery and consumption of a bread wafer believed by Catholics to be transformed into the body of Christ — and use it as a tool of political warfare.

“This must not happen,” the bishop spelled out in a 1,600-word essay posted in America, a Jesuit publication he contributes to.

McElroy had been making the case for months, including during a Georgetown University online forum Feb. 1, 2021, dubbed the “Initiative on Catholic Social Thought and Public Life.”

McElroy said there is “immense sadness” among bishops and the church as a whole that more isn’t done to protect the unborn, but a Communion ban is the wrong step.

On Friday, a spokeswoman for the San Diego diocese, responding to questions, told Times of San Diego: “We typically do not comment on what other dioceses do.”

Cordileone, 65, was ordained  by San Diego Bishop Leo Maher on July 9, 1982, and served as an associate pastor at St. Martin of Tours Parish in La Mesa until 1985. After earning a Doctor of Canon Law degree in 1989 from Gregorian University, he was appointed as priest secretary to Bishop Robert Brom.

Pelosi’s office did not immediately respond to a request for comment.

The archbishop’s decision comes after the leak earlier this month of a draft Supreme Court opinion indicating the top court would strike down the 1973 Roe v. Wade decision that legalized abortion nationwide.

Cordileone said Pelosi had not responded to his requests to meet in the months since she pledged to codify abortion protections in federal law after lawmakers in conservative states passed near total-bans on abortions at the state level.

Cordileone highlighted comments Pelosi made to the Seattle Times editorial board this month, citing her Catholic faith and support for abortion rights, then said: “They say to me, ‘Nancy Pelosi thinks she knows more about having babies than the Pope.’ Yes I do. Are you stupid?”

In his letter to the faithful, Cordileone wrote that “my action here is purely pastoral, not political.”

“Speaker Pelosi remains our sister in Christ,” the archbishop wrote. “Her advocacy for the care of the poor and vulnerable elicits my admiration.”

In her podcast, Gloria Purvis asked Cordileone about the rarity of his communion ban and: Why not excommunicate her?

First of all, I’m actually not the first bishop to do this. I was a new bishop back in the early 2000s when then-Bishop Burke of La Crosse, right before he moved to St. Louis, issued such a notification with regard to Catholic legislators in his diocese.

Also the then-Father [Kevin] Vann, who’s now Bishop Vann of Orange, he was the pastor in a parish in Springfield, Ill., that was a parish of Dick Durbin. [He] spoke with him and advised him he should not be receiving Communion. The bishop of the diocese at that time, then-Bishop [George] Lucas, now-Archbishop Lucas of Omaha, backed him up.

The current bishop there, Bishop Tom Paproki, has reaffirmed that. Also Archbishop Joseph Noumann of Kansas City, Kan., took this action with regard to Kathleen Sebelius, who was the governor of Kansas at the time.

So other bishops have taken this action, but excommunication has a whole other set of considerations. It’s more severe; I don’t want to take a more severe tack if I don’t have to. I’d rather do the minimum I need to do in order to repair the scandal.

“I would imagine some people are going to see this as being very heavy-handed and [think] I’m kind of being an ogre here,” he added. “But I cannot in my conscience allow the situation to continue and cause this scandal. And people are getting confused, people are getting upset, and it’s also fueling these flames of polarization and dissension.”