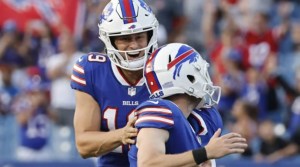 “This afternoon, we decided that releasing Matt Araiza was the best thing to do,” said Bills GM Brandon Beane. “Our culture in Buffalo is more important than winning football games.”

GM Brandon Beane: This afternoon, we decided that releasing Matt Araiza was the best thing to do. Our culture in Buffalo is more important than winning football games. pic.twitter.com/soHPcePFxz

Attorney Dan Gilleon, who filed suit on behalf of “Jane Doe,” said in a statement to Times of San Diego:

The Buffalo Bills had no choice but to cut their young punter after so badly botching their response to our claim: they ignored us, as though what I warned them would happen could be avoided if they just kept their heads in the sand. This is what enablers do.

My client’s life was forever scarred in October 2021, but she handled herself with grace and dignity. Not once did she express to me a desire to hurt her assaulters out of revenge or hatred. She never asked for a pound of flesh. Her only ask was the kind of justice that might save other young women from the hell she experienced.

When she authorized me to contact Matt Araiza and the other defendants, she made it clear that money was not her aim. She never asked for a dime from Matt Araiza. Mr. Araiza’s attorney knew that.

He knew that he had offered us money to settle the case and that we had rejected the offer. Yet, Mr. Araiza’s legal counsel had the audacity to go on a despicable, brainless TV tour to defame my client as a “shakedown” artist and “money grabber.”

Think about that. Mr. Araiza’s legal agent knew that a 17-year-old girl had left a room where Matt Araiza was also present, covered in blood and bruises and crying that she had been raped. Yet, he stooped so low that he was willing to label that the 17-year-old girl an opportunistic grifter.

This was utterly inhumane and stunningly foolish. If Matt Araiza had shown 1% of the grace that my client has, perhaps by offering an apology and [donating] his money to a charity serving rape survivors, he would still be a Buffalo Bill and his parents could sit in the stands and watch their son with pride. Instead, he decided to hire an attorney who knew only to viciously attack the young woman his client had raped. Now Mr. Araiza’s life is forever scarred too. Perhaps this is the self-inflicted justice he deserves.

ESPN reported that though Araiza did travel with the Bills to Charlotte for a Friday game against the Carolina Panthers, he was not seen on the sideline to start the game.

Regarding allegations that he and two other then-SDSU players raped an underage girl at an off-campus house party in October, Araiza said in a statement obtained by ESPN, “The facts of the incident are not what they are portrayed in the lawsuit or in the press. I look forward to quickly setting the record straight.”

Araiza, a San Diego native dubbed “Punt God” for the accuracy and distance of his kicking, was drafted by the Bills earlier this year.

Details: A few hours before Brandon Beane announced that the Bills released Matt Araiza, the team pulled his jersey from their online store and his nameplate was removed from his locker before Saturday's practice.https://t.co/8H3ogGSO6f

In a Thursday statement, the Bills said, “We were recently made aware of a civil complaint involving Matt from October 2021. Due to the serious nature of the complaint, we conducted a thorough examination of this matter. As this is an ongoing civil case, we will have no other comment at this point.”

No arrests have been made in the case, though the San Diego Police Department said it has completed its investigation and submitted the results of the probe to the San Diego County District Attorney’s Office for review and possible filing of criminal charges.

Asked about the roster move, SDSU’s sports media relations department released a one-sentence statement: “Regarding Zavier Leonard: He is no longer on the roster or participating in team activities.”

Ewaliko, a redshirt defensive lineman, was included on San Diego State’s 2022 roster dated July 18, but was no longer with the program when preseason camp opened Aug. 5.

In the complaint, the teen — identified as Jane Doe — says she attended a Halloween party on Oct. 17 with three friends at a house where Araiza lived.

The suit alleges Araiza “could observe that Doe was heavily intoxicated” but handed her a drink, which the complaint says contained not just alcohol, but also “other intoxicating substances.”

It also alleges Doe informed Araiza that she was attending high school at the time.

Later, the suit alleges Araiza led her to the side yard of the house and had sex with her, then took her to a bedroom where at least three other men were present, “including defendants Leonard and Ewaliko.”

The suit alleges Araiza threw her onto a bed and multiple men raped her over the course of 90 minutes while she “went in and out of consciousness.”

After reporting the incident to police, the suit states that detectives arranged for her to make “pretext” phone calls with the men.

During a call with Araiza, the suit alleges he “confirmed having sex with Doe, even telling her that she should get tested for STDs.” When she asked him directly again whether they had sex, he allegedly said, “This is Matt Araiza. I don’t remember anything that happened that night” and immediately hung up.