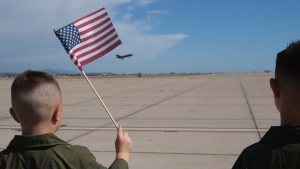 The fact his dad’s squadron just recorded some firsts in aviation history no doubt didn’t concern him either.

He and his three brothers — and mother — just wanted their dad back. After all, they hadn’t seen him for more than seven months.

Thomas Walsh, 4, can’t wait to get his hands on his father, Lt. Col. Brendan Walsh. Photo by Chris Stone

Maj. Zachary Hartnett greets his daughter, Josephine, 1, sons and wife at the end of his deployment. Photo by Chris Stone

Children run to meet their father as F-35C Lightning II pilots return from a 7-month deployment. Photo by Chris Stone

Hunter Hartnett, 4, shouts as he and his family sight their returning pilot father. Photo by Chris Stone

Wives, girlfriends and children await the return from deployment of the F-35C Lightning II pilots at Miramar. Photo by Chris Stone

A pilot’s wife has a tattoo that symbolizes the return of the Marines. Photo by Chris Stone

F-35C Lightning II jet pilots fly in formation as they return home to their families. Photo by Chris Stone

F-35C Lightning II jet pilots fly in formation as they return home to their families. Photo by Chris Stone

Thomas Walsh, 4, covers his ears as jets land at Marine Corp Air Station Miramar as he waits for his dad. Photo by Chris Stone

Jessica Kryst holds a photo of her husband, Maj. Justin Kryst, so her son, Parker, 15 months, can recognize him. Photo by Chris Stone

A young boy and his mother await return of F35C pilot. Photo by Chris Stone

The VMFA-314 Marine Fighter Attack Squadron (the Black Knights) is comprised of about 200 Marines and sailors.

During the deployment, CVW-9 executed more than 21,307 fixed-wing and helicopter flight hours comprising 10,250 sorties and 8,437 launches.

Pilots thus missed milestones — first words, first steps, birthday parties. Wives missed being able to call when they had a bad day and help when it seemed everything was breaking, spouses said.

“The kids were missing him,” Sheri Hartnett said of her pilot husband Maj. Zachary Hartnett. “They don’t understand. We’re just happy to have him home.”

Capt. Lew Callaway, CVW-9 commander, said in a statement: “Carrier Air Wing 9 sailors and Marines worked together over the last seven months, providing a credible deterrent to any potential adversary in the Pacific.

“Naval aviators culminated 100 years of aircraft carrier aviation history operating 4th and 5th generation aircraft from a Nimitz-class aircraft carrier at sea. We are grateful for the chance to serve, and celebrate our return to home port, family, and friends.”

CVW-9 took part in dual carrier operations in the South China Sea with the Carl Vinson Carrier Strike Group, as well as joint exercise Valiant Shield in June, bilateral exercises Noble Fusion in February and Jungle Warfare in March, both with the Japanese Self-Defense Force.

In July, CVW-9 trained alongside 26 nations during Exercise Rim of the Pacific 2022, known as RIMPAC.

“Words cannot express just how proud I am of the sailors and Marines attached to CVW-9,” said Master Chief Petty Officer Craig Vavruska, command master chief. “They expertly applied their training and faced each mission with strength and resilience. Their families have a lot to be proud of.”