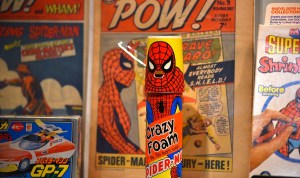 Spider-Man comic books and products are on display in the museum. Photo by Chris Stone

That can be seen at “Marvel’s Beyond Amazing: Spider-Man The Exhibition,” which opens Friday at the Comic-Con Museum in Balboa Park.

The exhibit celebrates the 60th anniversary of one of the most popular and enduring comic book characters and is the biggest attraction so far to land at the museum, which opened last November and like other indoor arts venues has struggled to attract crowds during the pandemic.

But with the opening of the exhibit coming just three weeks before the return of the giant Comic-Con pop culture convention, museum leaders are excited about the surge of fans expected to arrive at the museum.

What’s there to see and hear?

Fans entering the exhibit are greeted by wall-size reproductions of Spider-Man comic books with life-size cutouts of Spidey and villain Doctor Octopus literally jumping off the pages. All this while heroic music plays on loudspeakers and a light show flashes webs and Spidey’s mask on the floor in front of you.

The exhibit works on several levels.

Casual fans of the web-slinger will be thrilled to see props from the different Spider-Man movies that have earned a huge worldwide box office.

Hardcore fans will geek out over rare items, including valuable original comics, a Stan Lee script and a listening station where you can hear and see the bouncy musical intro to the old Spider-Man television animated show.

But the heart of the exhibit is a faithful retelling of the Spider-Man saga over the decades. Large informative panels go back to the beginning, telling of awkward teenager Peter Parker who is forced to grow up fast as a superhero and learn that “With great power comes great responsibility.”

Displays focus not only on Spider-Man’s comics creators and artists, but also on the characters in his universe, including the villains, and brings us to today with the newer versions of Spider-Man from the Marvel multiverse.

Time is also spent detailing the tragic and heroic arcs of the Spider-Man saga, from the “Death of Gwen Stacy” to the “Clone Saga.”

Add to that some Instagram-worthy photo settings and fans will be able to spend hours at the exhibit.

Artifacts were gathered from private collectors, from Marvel and from the personal collections of Patrick Reed and Ben Saunders, co-curators of the exhibit.

“We had far more material than we could ever possibly use,” said Reed.

Many of the items have never been shown before in public.

“This may be the only chance people have to see these things,” said Vandergaw.

Brian Crosby, director of Themed Entertainment/Development for Marvel, said having a 7,500-square foot space at the Museum made it the perfect place to display all the items, especially with Comic-Con just days away.

“All the stars aligned to bring this exhibit to life,” he said. “It’s very exciting.”

The exhibit is scheduled to run through the end of the year. Tickets can be purchased online at beyondamazingexhibition.com.

Luis Monteagudo Jr. is a freelance writer and pop culture enthusiast. He has written for The San Diego Union-Tribune, USA Today and numerous other publications.

A man in a Spider-Man costume walks outside before the opening. Photo by Chris Stone

Original Spider-Man drawings show the evolution of the character. Photo by Chris Stone

Spider-Man statues and comic pages are part of the display. Photo by Chris Stone

A Spider-Man gift shop is at the end of the new exhibit in the Comic-Con Museum in Balboa Park. Photo by Chris Stone

The mask of The Lizard is on display in the new Spiderman exhibit at the Comic-Con Museum in Balboa Park. Photo by Chris Stone

The mask of the Green Goblin is part of the new Spider-Man exhibit at Comic-Con Museum. Photo by Chris Stone