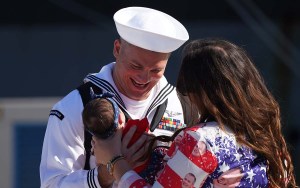 A military member greets a sailor aboard the USS Abraham Lincoln with a candid sign. Photo by Chris Stone

Aviation Boatswain’s Mate Brian Farber returned home Thursday along with nearly 5,000 others on the nuclear-powered carrier Abraham Lincoln after his fifth deployment.

His wife, Rebecca, said being without her husband was “almost unbearable, but it has worked out.”

“Growing my baby inside me without him didn’t feel right,” she said before his disembarking at Naval Air Station North Island.

But thanks to FaceTime, Farber was able to watch his daughter being born.

Now that hubby is home, she said, “We can start being a family.”

“A millionaire would wish to feel this,” he said.

“It never gets old,” Smith said after being enthusiastically greeted by his 4-year-old son, Ronnie III, and 3-year-old daughter, Adline.

A small girl welcomes a sailor aboard the USS Abraham Lincoln. Photo by Chris Stone

ABF2 Brian Farber is greeted by his wife, Rebecca, and daughter, Reagan, upon his return to San Diego. Photo by Chris Stone

Ronnie Smith, Jr. is greeted by his son, Ronnie Smith III, on Naval Base North Island. Photo by Chris Stone

Adline Smith, 3, is thrilled to welcome her father, Ronnie Smith, Jr. upon his arrival at homeport. Photo by Chris Stone

Margarito Soriano receives a hug from his father upon his return to San Diego. Photo by Chris Stone

A sailor heads for loved ones with a carnation in his mouth. Photo by Chris Stone

About 5,000 sailors and Marines return after a seven-month deployment. Photo by Chris Stone

Sailors wave to family members before getting off the USS Abraham Lincoln. Photo by Chris Stone

Other wives talked about the relief of having their husbands home to help around the house.

Said Jessica Pugh, wife of Senior Chief Larry Pugh: “It seems like things break down as soon as he leaves. It was a long 7 1/2 months. “You miss him. I just want to hug him now.”

“Abraham Lincoln sailors have worked exceptionally hard during this dynamic deployment and should be proud of their accomplishments,” she said in a statement. “It is incredibly humbling to serve alongside these professionals and observe their dedication to the mission.

“Every day of our seven month deployment, this talented crew displayed grit, resilience and professionalism in the execution of their jobs. Their hard work made the difference as we operated alongside joint and combined forces to ensure a free and open Indo-Pacific.”

In a telephone press conference Wednesday, Bauernschmidt said the Lincoln strike group was operating in the vicinity of Chinese warships at times, shadowing each other,

Asked if she would be concerned being near Taiwan after House Speaker Nancy Pelosi was there, Bauernschmidt said she wouldn’t be more concerned than in the past.

She said the future for women in the Navy was bright.

“There are always challenges with each and every individual, not just women,” she said. “We always continue to work to try to make the environment as fair and equal to everyone.”

She said she’s holding the CO job because in 1994, the women-in-combat exclusion was lifted as part of the National Defense Authorization Act.

“So a lot of ways women have been serving in the Navy for longer,” she said. “And that is the reason that I am here right now.”

While underway for 220 days, the Lincoln’s strike group sailed over 65,000 nautical miles and conducted a variety of missions, including maritime security and training for long-range strikes, anti-submarine warfare and air defense.

The Lincoln was the first carrier to deploy with a Marine Corps F-35C Lightning II squadron, which returned to Miramar on Tuesday.

Notable exercises during the deployment included Noble Fusion in February, Jungle Warfare in March, Valiant Shield in June, and RIMPAC in July.