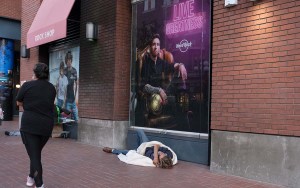 A homeless man sleeps in the Gaslamp Quarter of San Diego. Photo by Chris Stone

Father Joe’s Villages Wednesday detailed how easy it can be to fall into homelessness, how difficult it can be to escape it, and provided some possible solutions.

The homelessness services provider’s report comes on the heels of a 10% increase in homelessness since 2020, according to the Regional Task Force on Homelessness 2022 Point-in-Time count.

“Many of the realities that our clients and staff face every day are not known or understood by the general public,” said Deacon Jim Vargas, president and CEO of Father Joe’s Villages. “Through this report, we seek to better inform the public discourse about homelessness so that policy solutions devised in board rooms align with the true realities faced on the streets.

“I encourage everyone in San Diego, from everyday citizens to policymakers, to work as a united community to support, fund and enact effective solutions for those who need us the most,” he added.

The point-in-time count is a one-day snapshot of those experiencing homelessness and registers a minimum number of 8,427 homeless people across San Diego County, with the true number likely considerably higher.

“The challenges of finding every person in a car, canyon, or under a bridge, is impossible, but every effort is made to find and engage as many people as we can,” a statement from the Regional Task Force on Homelessness said when the count was released in May.

The number included 4,106 unsheltered San Diegans, with 4,321 individuals in shelters. Of those surveyed, 85% said they had fallen into homelessness while living in the region.

The Father Joe’s report lays out the most significant factors impacting homelessness in the region — lack of affordable housing, substance abuse, the criminal justice system, access to shelter and health care — and mentions some ideas for solutions. The report also breaks down the impact of rising food and housing prices that affect low-income individuals and families, forcing many into making difficult decisions among critical needs.

Additionally, providing recuperative care, street health services, the expansion of behavioral health care and conservatorship are proposals to help with the high cost of health care. Expanded same-day services — including medical assisted treatment, harm reduction resources and sober and non-sober shelter and housing options — are recommended by the report for substance abuse.

Father Joe’s also advocates for safe villages, outreach centers and designated areas for encampments as well as an aggressive stance on drug dealing and the need for programs similar to the proposed CARE Court.

The 2022 count was conducted in February by more than 1,400 volunteers across the county. It was the first such count since January 2020, before the negative impacts of the COVID-19 pandemic and the subsequent increase in shelter options.

The Regional Task Force on Homelessness said comparisons between 2020 and 2022 should not be measured by the same standard and that heavy rains the night before and frigid temperatures the morning of the count may have impacted the number of people sleeping outside. Still, the total number of people sleeping outside without shelter increased by 3%.

“The Point-in-Time Count is about much more than numbers — it’s about people,” RTFH CEO Tamera Kohler said. “Right now too many people are suffering in San Diego. They’re mothers and daughters, fathers and sons. They fell into homelessness due to a lost job, a lost spouse or some other crisis beyond their control.

“Add in the fact that we live in the most expensive housing market in the country, where double digit rent increases are common, and you can see why too many San Diegans are left behind,” she continued. “The people our volunteers spoke to — from a senior with Alzheimer’s sleeping in a tent, to a family sheltering in their car, to people with a full-time job but not enough income to pay rent — aren’t just numbers on a spreadsheet. They’re our neighbors, doing their best to survive.”

The Point-in-Time Count saw an increase in families experiencing homelessness of 56% from 2020. Black San Diegans, who make up less than 5% of the total population in San Diego County, made up 24% of the region’s unsheltered homeless population.

According to RTFH numbers, between Oct. 1, 2020 and Sept. 30, 2021, more than 36,500 San Diegans interacted with homeless services, meaning the true number of San Diegans living without permanent housing could be far higher than what the count found.