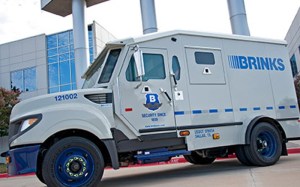 A Brink’s armored truck. File photo courtesy of the company

Millions of dollars in jewelry and gems belonging to exhibitors at a California retail show were stolen from an armored truck traveling north of Los Angeles last week, authorities said on Monday.

The robbery took place in the early hours of July 11 in the city of Frazier Park as the Brink’s Co. truck was heading toward a storage facility, said Brandy Swanson, director of the International Gem & Jewelry Show, which hosts retail exhibits in venues around the country.

Authorities initially reported the heist occurred in the Mojave Desert city of Lancaster in northern Los Angeles County, but FBI officials later confirmed the location as the community of Frazier Park about 50 miles to the west in Kern County.

“It’s all fine jewelry … and they’re just gone,” said one victimized vendor who spoke to Los Angeles-based television station KCAL9, a CBS affiliate, on condition of anonymity. “Sunday you had merchandise, today you don’t have anything.”

He said much of the stolen goods consisted of one-of-a-kind pieces he showed in video clips, like a sparkling bracelet made with 100 carats of natural, multicolored saffires set in 18-carat yellow gold.

The robbery involved about 25 to 30 lockers of jewelry and gems belonging to 18 individual exhibitors at a show in San Mateo, south of San Francisco, Swanson said. The merchandise was going into storage ahead of another show scheduled in Pasadena.

No other details of the robbery were provided.

Brink’s said in a press release that the missing items were worth less than $10 million, while Swanson valued them closer to $100 million. The security company could not be immediately reached for comment.

In explaining the discrepancy, Swanson said smaller exhibitors tend to undervalue their pieces for insurance because of the high cost of coverage.

Swanson said her group was working with local law enforcement and the FBI.

It was unclear how the truck was robbed, whether there were tracking devices on the lockers, or if there were security cameras on the truck or in the area, she said.

“These victims are mom and pop operators, but the value that was in those lockers is worth more than people understand,” Swanson said. “That’s their life. Their whole life’s savings is now gone.”