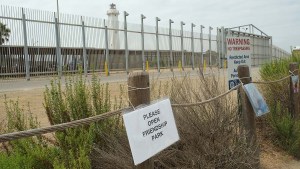 Border officials announced Thursday that the construction of two border barriers at the bi-national Friendship Park will be halted amid public concerns over the project.

According to Customs and Border Protection, construction at the park, along the U.S.-Mexico border in far southwest San Diego, will be paused “to engage with community stakeholders and to discuss the planned construction.”

The project is to rebuild barrier sections requiring repair in this area, the officials said.

Members of the public, along with elected officials, decried the project due to the proposed construction of 30-foot bollards and removal of pedestrian gates.

Advocates say the lack of a pedestrian gate will remove public access from the park, which has served as a meeting place for families with members living on both sides of the border.

“We have heard concerns about the project as currently planned, and it is important to me to be responsive to the local community on this issue,” said CBP Commissioner Chris Magnus. “I look forward to continued conversations with the community regarding this project during the pause.”

The park has been closed since 2019. CBP says that when construction is completed, the park will be open for “a minimum of two days each month.”

Rep. Juan Vargas, D-San Diego, whose district includes Friendship Park, said in a statement, “Since its inauguration in 1971, Friendship Park has been a testament to the U.S.-Mexico relationship and has allowed families to come together.The proposed projects would bar public access to Friendship Park, preventing it from serving communities on both sides of the border.”

He called the halt to construction “a welcome step in the right direction” and urged CBP “to work with federal, state and local governments and community stakeholders as they move forward in preserving access to Friendship Park.”