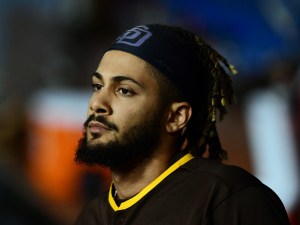 A glum Fernando Tatis Jr. in the dugout during a 2021 road game against the Los Angeles Dodgers. (Photo by John Cordes/Icon Sportswire)

Said one fan on Twitter: “Tatis better come back and win MVP next season.”

Tatis better come back and win MVP next season.

A statement from the Padres read: “We were surprised and extremely disappointed to learn today that Fernando Tatis Jr. tested positive for a performance-enhancing substance in violation of Major League Baseball’s Joint Prevention and Treatment Program and subsequently received an 80-game suspension without pay.”

The team added that “we fully support the program and are hopeful that Fernando will learn from this experience.”

Tatis, 23, tested positive for the performance-enhancing drug Clostebol, coming just days after he played four games in Double-A ball on rehab assignment. Though he has missed all of the 2022 season thus far, he had been set to rejoin the Padres soon, as manager Bob Melvin had estimated a mid-August timeframe for Tatis to play.

Tatis, in a statement issued by the MLB Players Association, said he was “completely devastated” by the suspension. He called his use of the PED a mistake — he explained that he inadvertently used a drug for ringworm that contained Clostebol. He also said he has passed all his other drug tests during his short career.

He added that he had opted to appeal the suspension, but wanted to own up to his mistake. He said he should have “used the resources available to me” to determine if the drug he planned to use had any banned substances in it.

“I have no excuse for my error and I would never do anything to cheat or disrespect this game that I love,” he said, while apologizing to team owner Peter Seidler, executive A.J. Preller, the Padres organization, his teammates and fans.

He missed the first half of this season with a fractured wrist stemming from a motorcycle accident in the offseason. The suspension will run through the rest of the 2022 season – there are about 40 games remaining in the regular season, then the postseason – and into next year.

Despite Tatis’ apology, Preller expressed frustration Friday on a day when all eyes should have been focused on new Padre Juan Soto’s first trip back to Washington D.C. following the Padres’ big trade with the Nationals.

He acknowledged that Tatis is “a great talent” and “a guy that we have a lot of history with and do believe in,” but also conceded that trust has become an issue.

“These things only work when there’s trust both ways,” said Preller from Washington, where he’s traveling with the team. “And I think that’s going to be something that we have plenty of conversation and time to talk to Fernando about and that’s something that clearly if we’re going to have a partnership and a real relationship, we’ve got to make sure that’s that’s strong.”

Teammate Mike Clevinger was blunt in saying he hopes that Tatis “grows up and learns from this and learns that it’s about more than just him right now.”

The Padres, despite the unsettling news, won Friday 10-5.

Tatis has established himself in just three years in the league as a charismatic talent, but he has missed numerous games due to injuries, including to his back and shoulder. He has hit .292 in his career, with 81 home runs and 195 RBIs.

Those numbers naturally made him a fan favorite. They responded on social media Friday with comments that varied from mocking to mournful.

Told my 8 year old daughter about @tatis_jr Her reaction “Why would he cheat?” Just broke me.

Tatis fined half season suspension for PED’s. Sometimes Icarus flys too close to the sun.

Tatis is saying he tested positive because of the medicine he took for ringworm. LOL

So after signing a 10+ Year extension north of $300M, Tatis goes out and breaks his wrist riding a motorcycle and gets suspended for PEDs

Padres fans turning on Tatis and in shambles. Good https://t.co/nnksyRcGff

Seriously, what’s the precedence for this Tatis situation? I don’t think there is one for a 23yr old who has 13yrs/almost $330mil on his contract getting popped for PEDs AFTER his team had already lost trust. His entire career is tainted & can #Padres trust? #TimeToShine

Instead of selling your Tatis cards, just start a PED card collection!

Is he immature? Definitely.

He doesn’t seem to have any regard for his teammates, his organization, or his place in the game.

The padres have a big problem on their hands.

Congratulations to @tatis_jr for being the only player in MLB history to be this good and this stupid. There’s been a lot of good and a lot of stupid in this league. Tough to be the best here…. https://t.co/Y2jhT9BgA8

so Fernando Tatis Jr got into a motorcycle accident, got ringworm and got suspended 80 games for PEDs. he's living life

If he was a decent person @tatis_jr would swallow his pride and admit what he did instead of pretend he accidentally took some garbage medicine. Thanks for taking the punishment like an adult but take the actual blame for cheating with it, don’t fake that BS. #mlb #padres

— From staff and wire reports