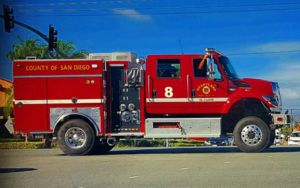 A Heartland Fire and Rescue engine. Courtesy of the department

A home being watched by the family house sitter was badly damaged in a fire Monday.

Firefighters responded to a blaze that started in a bathroom at the home on 1100 block of Brockton Street around 1:15 a.m. Monday, according to the Heartland Fire Department.

The house sitter was able to escape the fire and crews helped rescue the cat.

Crews had the flames under control within about 40 minutes, said Andy McKellar, a spokesman for the agency.

The fire caused an estimated $200,000 worth of property damage, McKellar said.

The cause of the fire was under investigation.