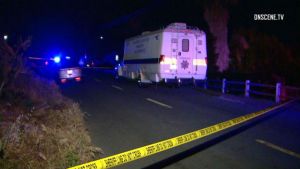 A first-degree murder conviction was upheld by an appeals court panel Wednesday for a man who shot and killed his wife in Vista.

Andrew Thomas Smith, 61, was convicted by a Vista jury last year for the April 13, 2019, shooting death of Jean Moore Smith, 59, and later sentenced to 50 years to life in state prison.

While a three-justice panel of the Fourth District Court of Appeal rejected Smith’s arguments to reduce his conviction to either second-degree murder or voluntary manslaughter, they ruled he is entitled to a possible re-sentencing, in which a judge could rule to strike a firearm enhancement that added a 25-years-to-life term to his sentence.

Smith was arrested on the night of April 13 by sheriff’s deputies at the couple’s Rancho Vista Road home. Moore Smith, who was shot in the neck, was taken to an area hospital, where she was pronounced dead shortly after arrival.

Smith called 911 to report the shooting and told a dispatcher, “She’s pushed me to the limit. I’m so sorry, but she did,” according to a 2019 San Diego Union-Tribune article, citing evidence from Smith’s preliminary hearing.