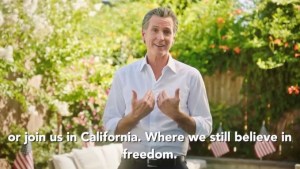 Gov. Gavin Newsom in one of the ads on Fox News. Image from video

Gov. Gavin Newsom, who is increasingly mentioned as a possible presidential candidate, took aim at the Republican Party and right-wing Florida Gov. Ron DeSantis with a television ad that debuted on conservative Fox News Monday.

In the ad, he claims freedom is under attack in Republican-led states like Florida, citing voting restrictions, the banning for books in school libraries, and anti-abortion laws targeting women and doctors.

He urges Floridians fed up with their governor, who is also a potential presidential candidate, to “join us in California — where we sill believe in freedom.”

We’re about to celebrate Independence Day — but Freedom is under attack by Republican leaders in states like Florida.

It’s time to stand up. Don’t let them take your freedom. pic.twitter.com/cFI5UzgZzX

Polls show DeSantis trailing only Trump as a potential presidential candidate among GOP voters. While Newsom is running for re-election as governor and has said he isn’t interested in the White House, his name is increasingly mentioned.

Last month Newsom joined Trump’s Truth Social network in what he described as an effort to combat “Republican lies” about U.S. politics.