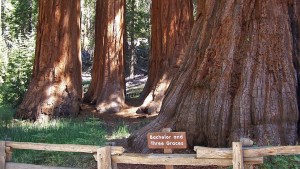 A wildfire was burning through part of California’s Yosemite National Park on Friday, threatening some of the largest and oldest giant sequoia trees in the world as the state faced another potentially devastating fire season.

Authorities closed the area of the nearly 1,200 square mile park where firefighters battled the blaze, which has burned 46 acres of giant sequoias, officials said.

The largest trees in the world by volume, giant sequoias have coexisted for millennia with fires ignited by lightning, and the park often lets such blazes burn to reduce fuels and the risk of catastrophic wildfires.

None of Yosemite’s landmark trees, some of which are over 3,000 years old and about 300 feet high, were reported destroyed by the Washburn Fire in the Mariposa Grove area, the cause of which was unknown, a fire official said.

“When we don’t see an obvious natural start we go into suppression tactics,” said Nancy Phillipe of Yosemite fire information.

The United States is having its worst wildfire year in more than a decade, with around 4.7 million acres blackened year-to-date. That is more than twice the 10-year average, according to National Interagency Fire Center data.

New Mexico and Alaska have been hit by large, intense wildfires blamed on drought and erratic weather that forest biologists link to climate change.