‘Here There Are Blueberries’ Chronicles the Terrifying Banality of Holocaust Evil 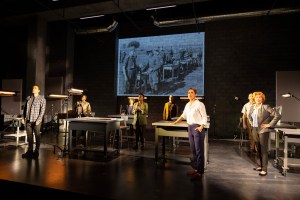 A scene from “Here There Are Blueberries.” Photo by Rich Soublet II

Over the years, some people have wondered what normal, everyday citizens in Nazi strongholds were doing and thinking during the Holocaust. Especially when they were only miles, sometimes yards, away from the horrors of the concentration camps, where millions of people — Jews, homosexuals and Roma, in particular — were being obliterated, exterminated.

Were they oblivious? Unconcerned? In denial? Complacent? Complicit?

Decades ago, my sister was in Poland, looking to visit the Auschwitz/Birkenau concentration camp complex. She knew she was close, but in a nearby café, none of the residents she asked was able to tell her where it was or how to get there.

When he heard about an album of never-before-seen behind-the-scenes photos from Auschwitz, Moisés Kaufman and his colleagues set to work. Kaufman, the son of Holocaust survivors who immigrated to Venezuela, is the founder and artistic director of the Tectonic Theater Project.

The company uses a trademarked theatermaking method, Moment Work, a rigorous process of research, interviews and collaboration, to create non-fiction stories in a theatrical context.

Tectonic created “The Laramie Project,” about the grisly 1998 murder of a young gay man, Matthew Shepard, in Wyoming; and also, among others, “Gross Indecency: The Three Trials of Oscar Wilde.”

Now, in a new play written by Kaufman (who also directs) with company charter member Amanda Gronich (who also co-created “The Laramie Project”), Tectonic is at the La Jolla Playhouse for a world premiere co-production, “Here There Are Blueberries.”

The basis of the work is a photo album that was anonymously donated in 2007 to the United States Holocaust Memorial Museum in Washington D.C., by a retired U.S. Army lieutenant colonel. He’d found it in a trashcan in a closet in the basement of an abandoned Frankfurt apartment building where he was briefly housed just after the war. He held onto it for 60 years.

Featured inside were 32 pages and 116 shocking photographs — of Nazi top brass, doctors and everyday workers at Auschwitz, including a bevy of young women, ages 17-30, part of an SS group called the Helferinen, a hand-picked female Nazi elite who served as telephone, telegraph and radio operators at Auschwitz. (None of the Helferinen were ever prosecuted).

The album included the proud personal memories of Karl Höcker, the adjutant/administrative assistant to SS Major Richard Baer, the last commandant of Auschwitz. The photos, taken between 1944 and 1945, show the groups laughing, singing and partying, feasting on blueberries, relaxing and sunbathing with their families in a chichi chalet, a resort lodge called Solahütte, situated within the Auschwitz complex.

Meanwhile, a short distance away, within view, thousands were starving, being shot, beaten or gassed to death.

Kaufman and his group had their work cut out for them.

All I could think about all evening was Hannah Arendt, the German-Jewish political philosopher who became a naturalized American citizen in 1950. In 1961, she asked The New Yorker if she could cover the Israeli trial of Adolf Eichmann. It was then that she coined the term that appalled so many: “the banality of evil.”

Eichmann was a bland, balding bureaucrat — who was executed for horrific crimes against humanity, as one of the major organizers of the Holocaust, what the Nazis called “The Final Solution to the Jewish Question.” He was, Arendt wrote, “terribly and terrifyingly normal.” She was excoriated for saying so.

It’s much easier to hate a bona fide monster. But as we learn in “Blueberries,” the leaders of the Auschwitz concentration camp, as shown in the photo album, weren’t born monsters. They started out as a bank teller, a confectioner, an accountant. They were Nobodies, puny functionaries who became, in their minds, and as part of a larger ideological group, Somebodies… people who had power, including the power to decide who lived and died.

In a startling thematic confluence in local theaters, no fewer than four recent shows have touched on or spotlighted the rise of fascism in the 1930s: “Lempicka” at La Jolla Playhouse, “Witnesses” at the California Center for the Arts, Escondido, “Cabaret” at Cygnet Theatre
and now, “Blueberries.”

Three of those theater works (“Witnesses,” “Cabaret” and “Blueberries’) ask the pointed, gut-wrenching question, ‘What Would You Do?’

We here, right now, in America, cannot afford to ignore — or be indifferent to — what’s going on around us.

“Evil comes from a failure to think,” Arendt wrote. “Every genocide starts with words.” That precise contention is paraphrased in “Blueberries.”

Once again, horrible words and thoughts and unthinking people are crowding out reason and rationality. Once again, it all started with words — and untruths. And it’s being perpetuated by those who believe those words and repeat those untruths.

Not all of them are the monstrous, hate-filled, violent folks who stormed the Capitol. In searching out facts, conducting interviews, getting first-person information, the January 6 committee is doing just what the Tectonic Theater collaborators do.

On a deceptively simple set (designed by multi-award-winner Derek McLane), comprising movable desks and tables rimmed with neon lights, and opening/closing walls to support the chilling projections (David Bengali) of the archival photos, the historians and archivists at the Holocaust Museum sift through the data and the donors (another photo album emerged after the Höcker images were publicized internationally and someone recognized his grandfather in the pictures), to try to get to the bottom of the story. The story, of course, is bottomless.

“I can’t help wondering,” one of the historians says, “what each of us has left behind in boxes.”

Why did the lieutenant colonel hold onto the album for so long? Why was there such careful documentation of the parties and celebrations and blueberry-eating of the Auschwitz staff?

Unlike all prior concentration camp images, no prisoners were shown in these pictures. There were several high-profile Nazis on display, though, including Rudolf Höss, deputy Führer to Adolf Hitler, and the infamous “angel of death,” Dr Josef Mengele.

Our narrator/guide through the unraveling process is Rebecca Erbelding (played by Elizabeth Stahlmann), archivist at the Holocaust Museum. We also hear a good deal from Judy Cohen (local favorite Rosina Reynolds), curator of the museum’s photographic collection at the time of the acquisition.

All of the eight versatile actors play multiple roles, blithely crossing boundaries of age, race, gender and nationality (though it isn’t clear why only some of them have accents). They even take turns providing the soundscape for the piece, including singing along, live, to accordion-playing as shown in the photos (sound by Bobby McElver, excellent lighting design by David Lander).

We don’t learn too much about any of them, except maybe Karl Höcker, the ever-smiling owner of the album, who provided the hand-written photo captions, one of which gives the show its title. And Rainer Höss (Charlie Thurston), guilt-ridden grandson of the creator of Auschwitz, who at one time feared that violence and the “exhilaration in cruelty” might be inherited in his DNA.

The findings are told in a dispassionate, straightforward, documentary style; there’s no sensationalizing or sentimentalizing, no playing on tear ducts or heartstrings.

That’s what makes this type of factual, journalistic theatermaking so compelling. You can’t refute the revelations, but you have to digest and interpret them for yourself (There are post-performance discussions/audience talkbacks on August 16, 17 and 18 to help you process the alarming disclosures).

The biggest surprise, perhaps, was the chalet where “good workers,” at every level, could be given a few days leave/reprieve as a reward for their contributions, presumably to the cause — of killing 1.1 million people in that largest and most famous of concentration camps.

It defies comprehension. After all these years, as the survivors are dying off day by day and more people become Holocaust deniers, it’s amazing that there are still discoveries to be made about the Holocaust. The content of “Blueberries” offers a different viewpoint from the usual reports; these hair-raising revelations come from the perpetrators (and their descendants), not from the victims.

In these most terrible of anti-Democracy, freedom- and rights-stealing times in America, there are still salient lessons to be learned.

History can, and often does, repeat itself. We’d better beware… and be aware.